Last spring I posted some images of my 1981 Fui Professional, today, just some additions.

I came across some Suntour rim and tire covers on eBay a few months back.  Seeing that the color scheme matched the newly completed Professional perfectly, I couldn't resist.  They're used to keep grit, debris and UV light off the delicate tubulars tires while traveling or in storage.  For me, they're just an added piece of Suntour history that I enjoy.

The last picture in the series is what is at my back when I photograph my Fujis.  It's a private beach club building with a considerable overhang with very open shade. The view in the photo is looking straight to the southeast. Bright, yes, but never too contrasty.  In the summer, it's closed off to the public, in the winter the sun is so low there is never any shade.  So my time there is very limited due to the seasons, weather and other restrictions. 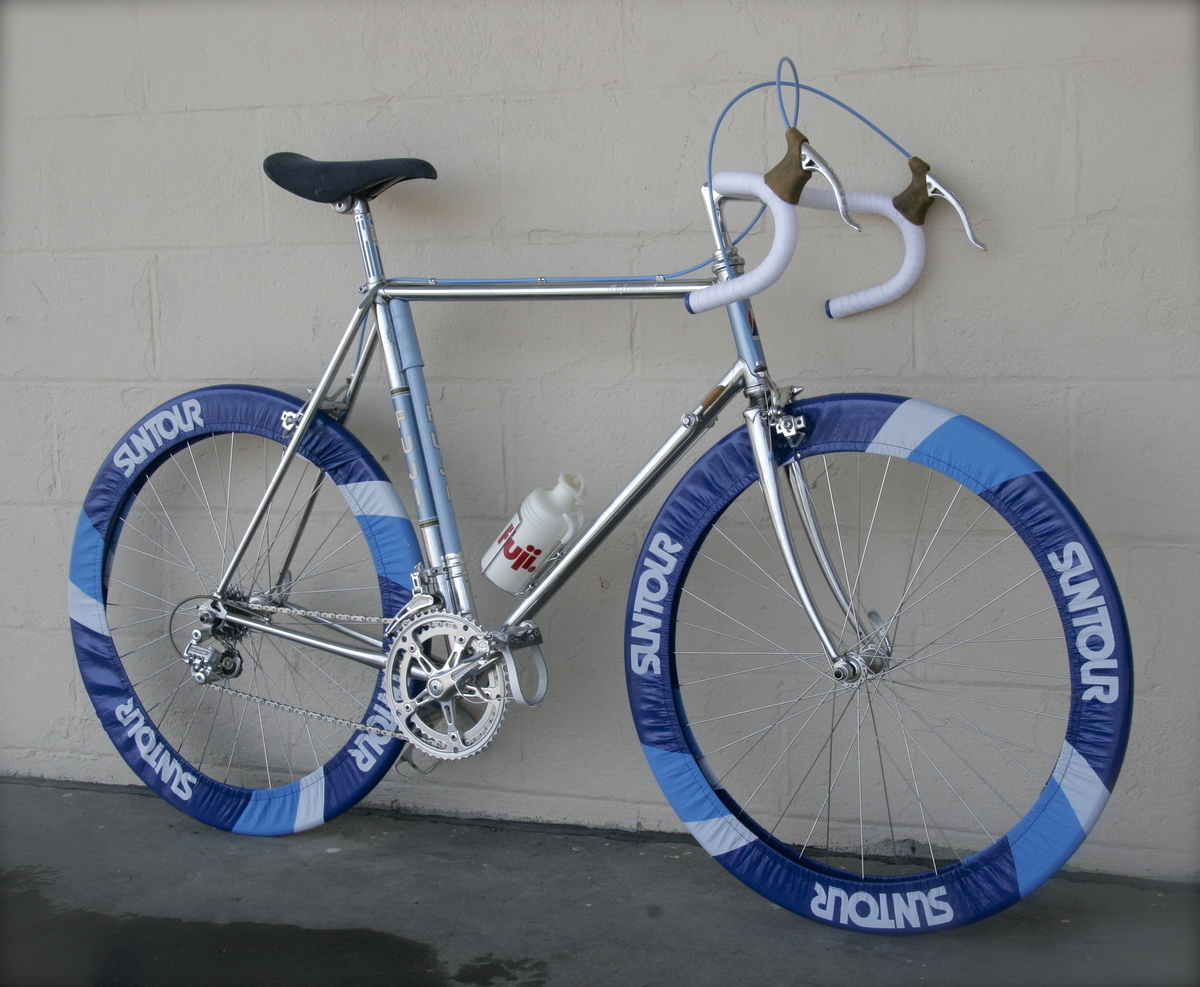 Both frames arrived over the summer, in their stunning "Hana Blue Web" color scheme.  The curved top tube '87 and it's straight top tube brethen, the '88.

Both came as frames only which will give me more creative control over the final build. Check back in the spring! 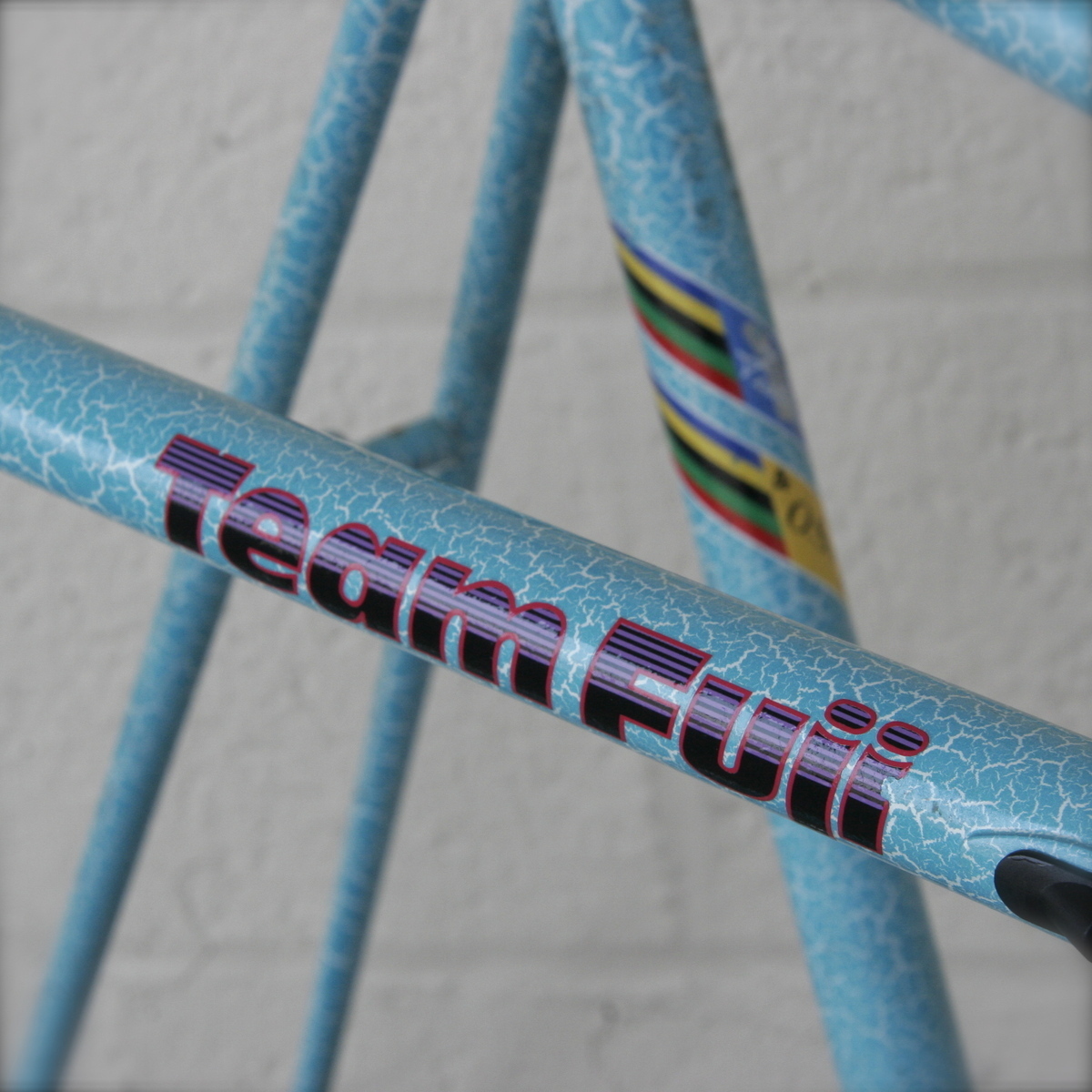 The Fuji Design Series, "DS," serves as a kind of capstone to the approximately twenty year span of the great classical era of Nichibei Fuji Cycle Company, LTD. Thanks to Brian L's dedicated findings of Japanese bicycle historical source material, we have the "Japan's Bicycle Guide" editions going back prior to the first Fuji US Catalog of 1971. Around 1967 Fuji leaves what I'll call the "late vintage era" and lists the "Fuji Racer" their finest bicycle in the Japan Bicycle Guide. Available in one size, 21" and built of chrome molybdenum steel tubing. By 1969, still only available in 21" the premier Fuji offering is called the "Finest." A classic road bicycle in every sense from components to tubular tires. The Road Racer as the top model is aptly renamed the Finest, but now what for the newer "Finest?" The "Newest" of course!

With Fuji's first US catalog comes the famous trio of: Newest, Finest, and S10-S. 1975/1976 is the year Fuji introduces its new top model — not the "Newest-Newest" as some might jest, but the "Professional." The professional would continue through several iterations, including the magnificently draped (if not technically superior) Fuji Professional Super Record cataloged independently in 1981 and 1982, but listed still under the Professional until 1985. By this time these magnificent bicycles are feeling the strains of the International economy (no longer super favorable to the appreciating Yen) and new materials, such as titanium. By 1988 the top of the line is the Fuji Titanium with a suspect livery of colored diamonds; the top of the line steel bicycle is the Opus IV — an amazing machine also hidden under the new post-classic liveries. At the end of this twenty year classic steel Fuji era: 1968 through 1988 are three years production of the sublime Design Series frames: 1986, 1987, 1988.The DS was sold as a frameset only with the beautiful Hatta headset. Ranging from 49 cm to 61 cm (track) and 63 cm (road) 11 framesets were available to enthusiasts. In the rather strangely delightful color combination of Rosata and deep pink metallic over chrome (some called it Dentine) the livery was quite striking. The tubing is Ishiwata 019E, on the frame called Fuji 9658. The feel on the road of this steel is sublime, precise, subtle, exhilarating. The Design Series machines are the pinnacle of what Fuji released.This DS Track is Suntour Superbe Pro equipped with Araya Aero 4 rims, bladed spokes, and Soyo 45 track tires. Not such an amazing back-story; I found it on eBay, and paid too much at the time. But I was not disappointed; the bicycle had never been ridden, a time capsule from i1985/1986 — Even the tires had never been glued on the rims. The track frame has the signature of Mark Gorski on the frame. Fuji sponsored Mr. Gorski, and he won the 1984 Olympic Sprint Gold Medal. So the signature carries some elegant history with it. The beautiful Japanese crests, eight designs in all, are supposedly the family crests of the various builders, but this has not received 100% positive verification. The Nitto racing stem and Nitto B123AA Craft alloy track bar are works of art unto themselves. Scott R. supplied me with the exquisite suede rosetta bar wrap. I under-wrap the bar with matching color cloth (one layer, no overlap) before stitching on the suede wrap. This provides a bit more cushion, but importantly allows one to pull the stitching a bit more and prevents the leather from ever rolling. Another bonus is the hole in the tape, where the waxed linen cord passes through, is not backed by the raw bar color. Instead of seeing pinpricks of alloy or steel, the matching warm color of the cloth tape yields a much more luxurious finish. The chromed fork crown with the lovely heart cut-away adds a sweetness to this purpose-built machine, this swan-song Magnus opus of the great Fuji classic era. 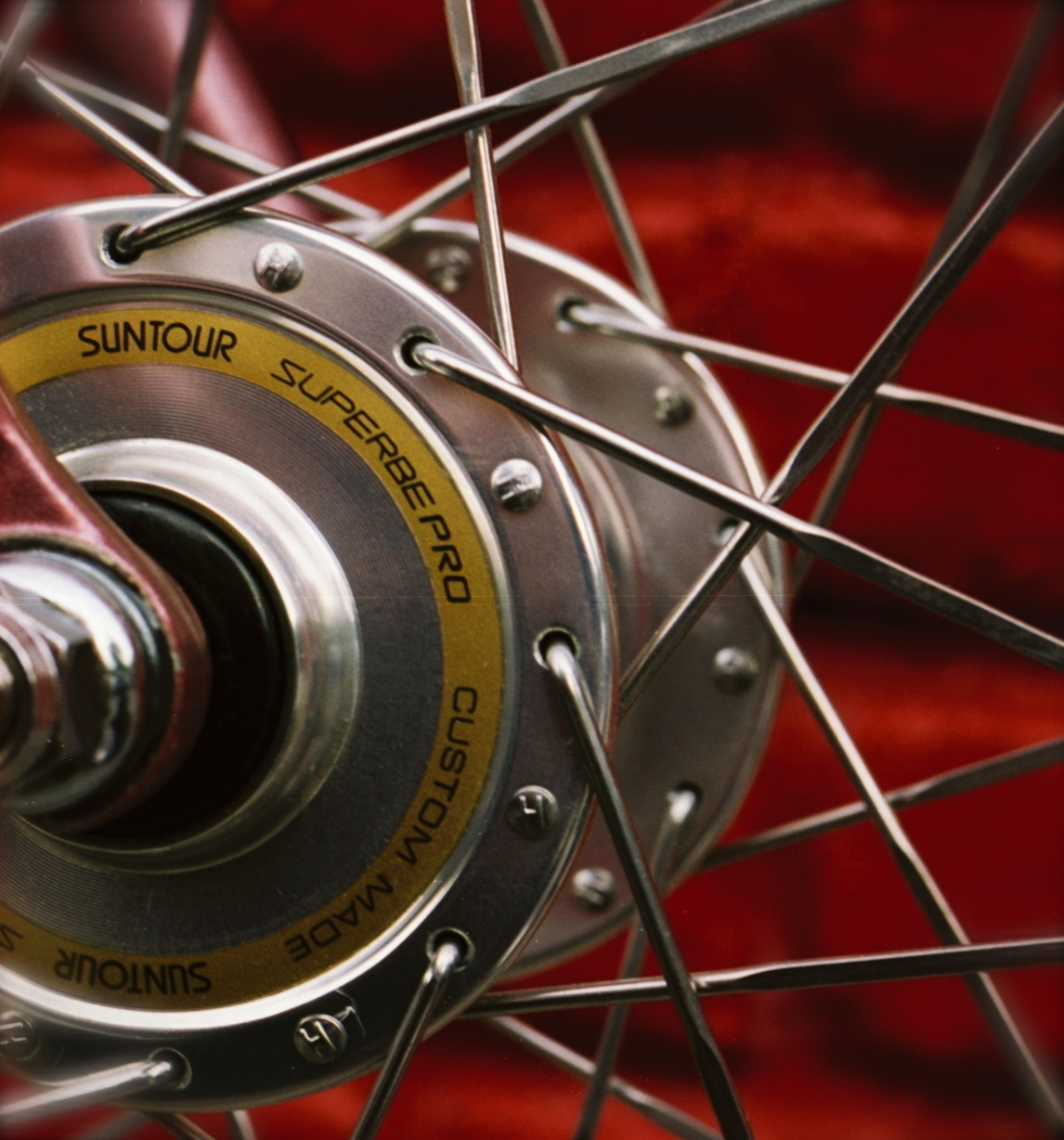 Rescue Mission Complete!  I asked my friend Andre to let me post some photos of his 1985 Opus III that he had purchased and breathed life back into.  A stunning job of stripping and polishing, the results are gorgeous.  Keep this in mind if you come across a battered Opus on Craig's List or Ebay.

Check out his blog "Ride it or Die".  Lot's of good stuff there as well as a few more Fujis. 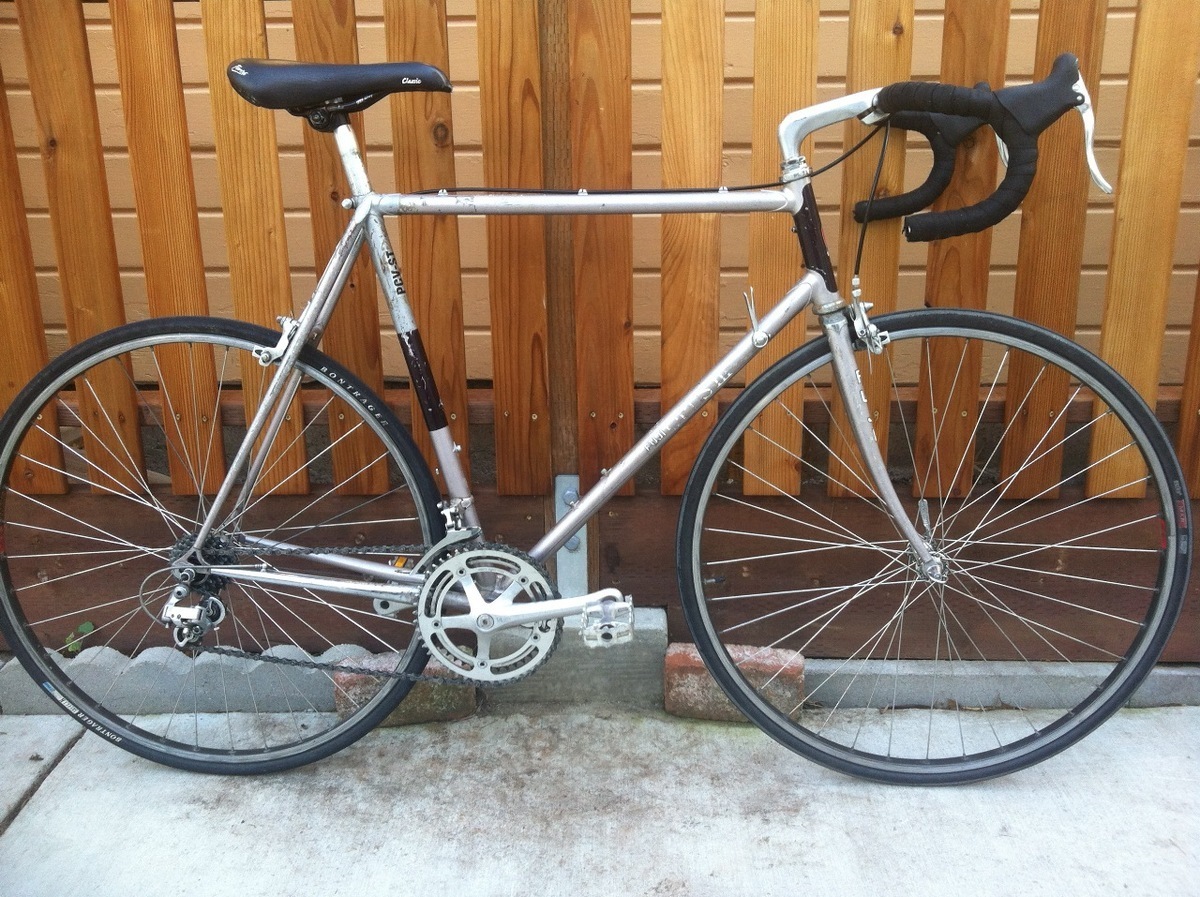 Another stunner from William Bevington! 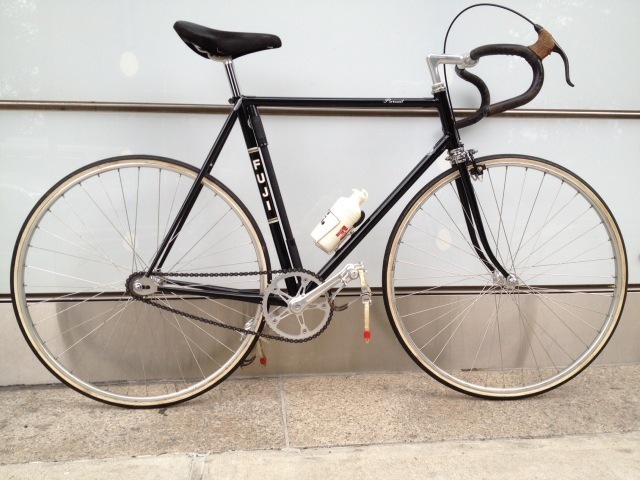 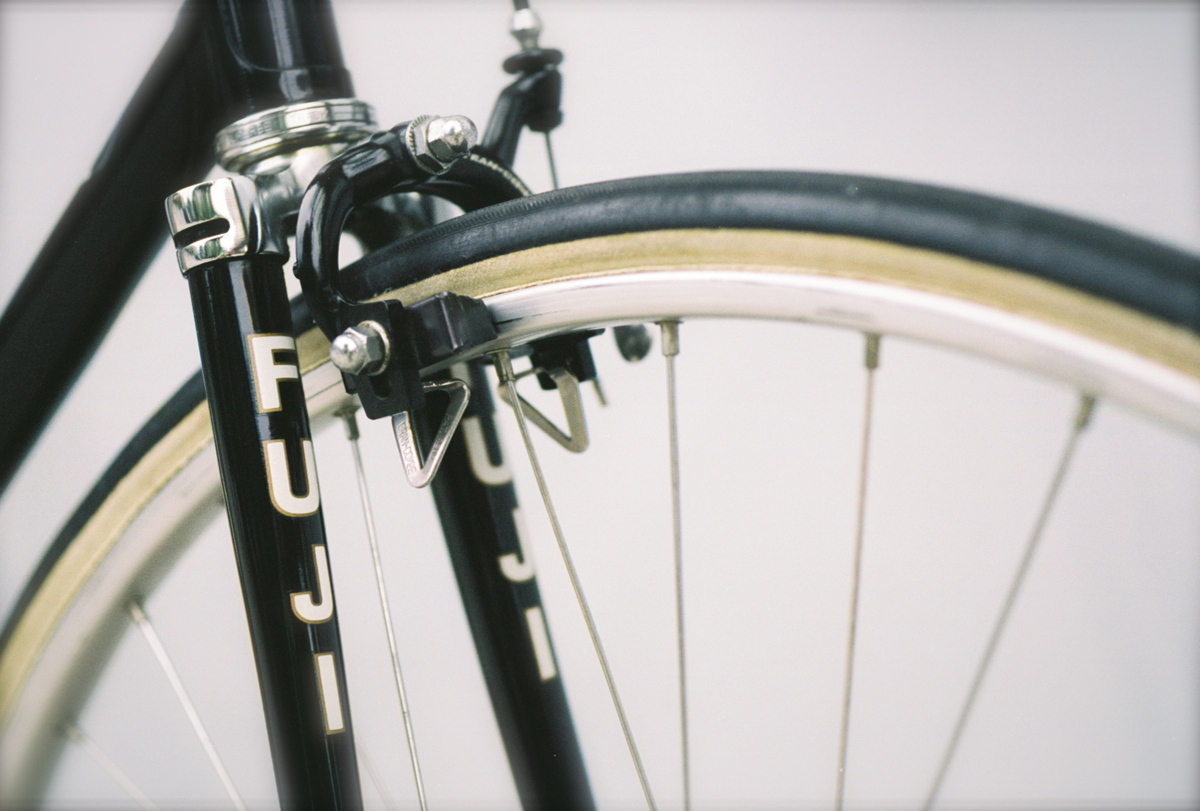 "Behold the Fuji Pursuit! This issued out of a corner of the Nichibei Fuji Works in 1977. As far as "we" know it is one-of-a-kind. Very much ahead of its time, this point-to-point single speed is not a fixie but a truly modified track machine. Of particular interest is not the drilled fork crown accommodating the single front black-anodized brake, but the water bottle fittings! Built from Fuji's 331 steel tubing, it is essentially a contemporary Fuji Professional with track drop-outs, lovely round-sectioned tubing fork crown, modified lugs and rear stays, well, perhaps it is far more than simply a modified Fuji Professional. Black and white livery, as clean as it gets." 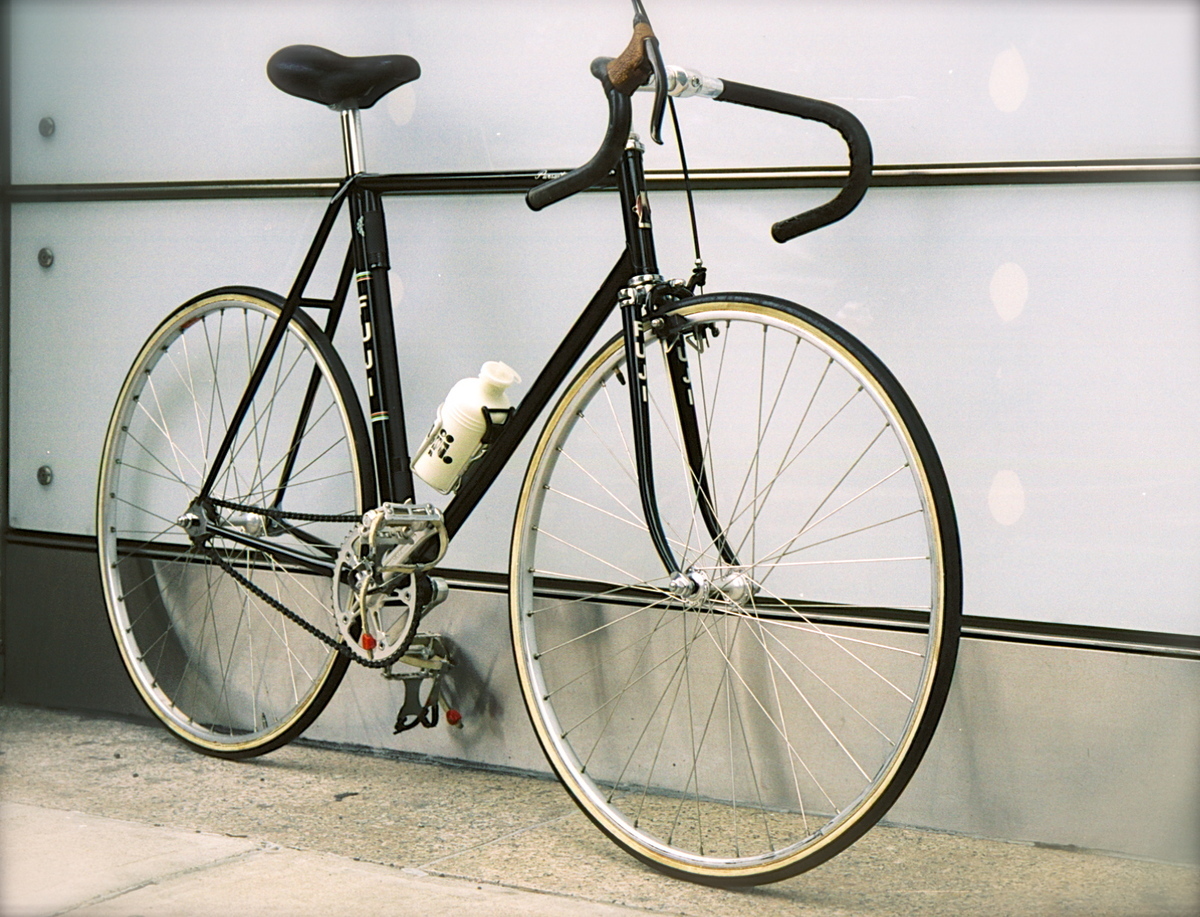 "The bicycle is not only one-of-a-kind, it is original, unchanged for 35 plus years. It came into my hands through the always generous machinations of Scott, who helped broker a deal with Warren Koebler of Belmont Wheelworks outside of Boston. This is an ex-Gene Ritvo steed. Others may know as to whether Gene had a hand in the Pursuit's design and creation, the likelihood is that he certainly did. He was the first owner, and I, the next. It is one of a brace of black-liveried wonders which Gene owned. It's twin is another rare, though not quite as rare bird, a black Fuji Professional with orange detailing. Both sport the magnificent Crystem Nitto stem — what a wonder of elegant design. This clamps to a marvelously figured ferrule of the Nitto bars; all is encased in well aged stitched black leather (on the Pursuit), chestnut leather on the matching black professional. The black fluted stem is something Gene probably did, not factory." 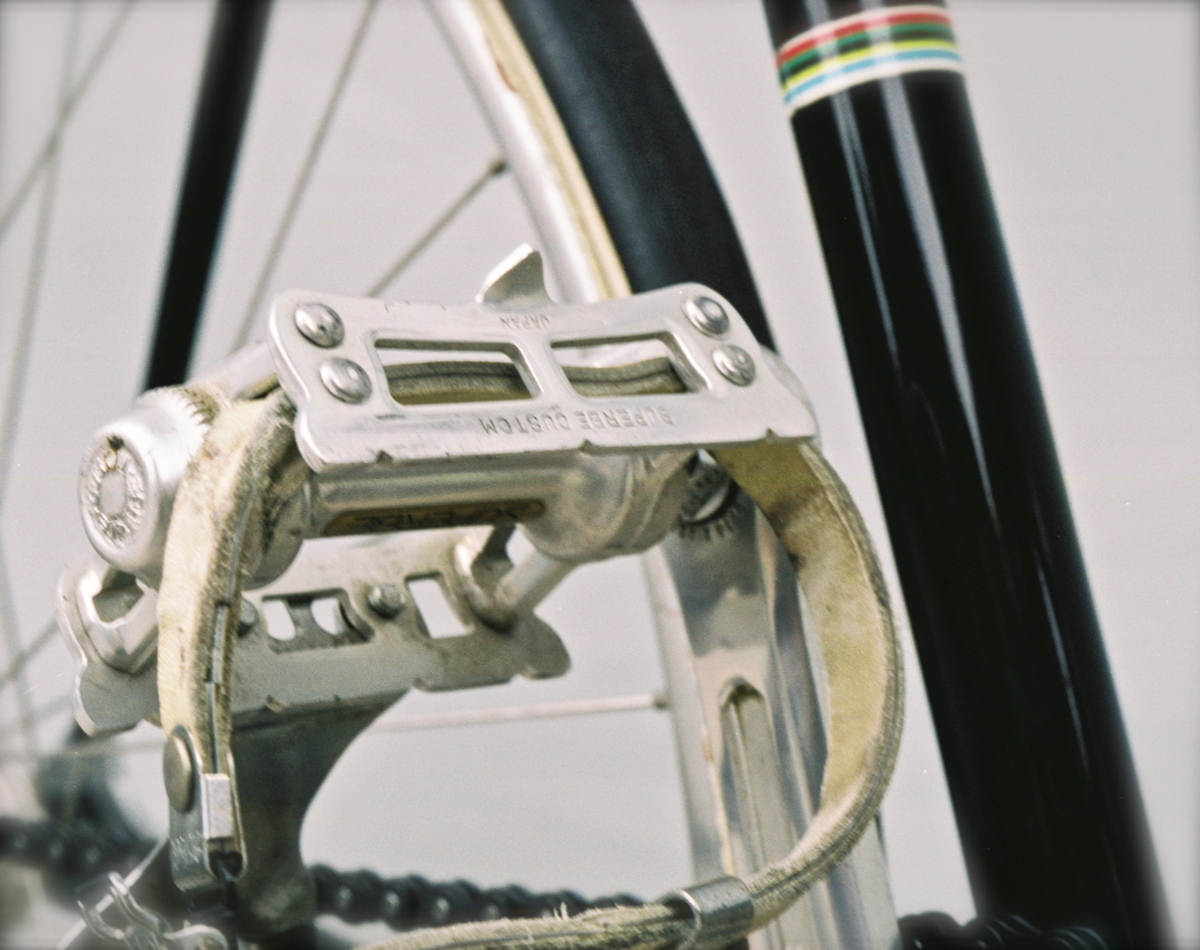 "Riding this one-off through New York City streets is a blast. No trepidation except for those well-aged and now impossible to get Soyo Special 300 tubulars. They were my favorite tires back in the day, and they do not disappoint currently. I brought them up to 95 lbs. pressure (in deference to their age I did not want to exceed 100 lbs.) and put the Pursuit through a fairly high-speed run around Central Park, then down through Manhattan to the Brooklyn Bridge, out to get lost somewhat in Brooklyn (thanks iPhone!) and back to safety. I have one old Soyo Special 300 spare just-in-case, but this might be the last risk I take, as the bicycle remains 100% original and I am loath to diminish that through a flat tire. The Pursuit is as direct as one would imagine, a total joy to ride — solid, precise, and unwinding with a sweet abandon. Scott and I were originally going to break up the set of two black-liveried Pursuit/Professionals, but we could not do it, they are meant to be shown in tandem. So Scott and I, leaning on his intense generosity as our guide, decided I would carry the flame for a while and keep them together. As they say, "we worked out a deal." But here, now, is the Pursuit — Fuji Advanced Sports should probably rerelease it, and let people know they were way ahead of the curve with this one. Sorry about the scratched up water bottle with my favorite logo! The Fuji 3-dot. Enjoy." 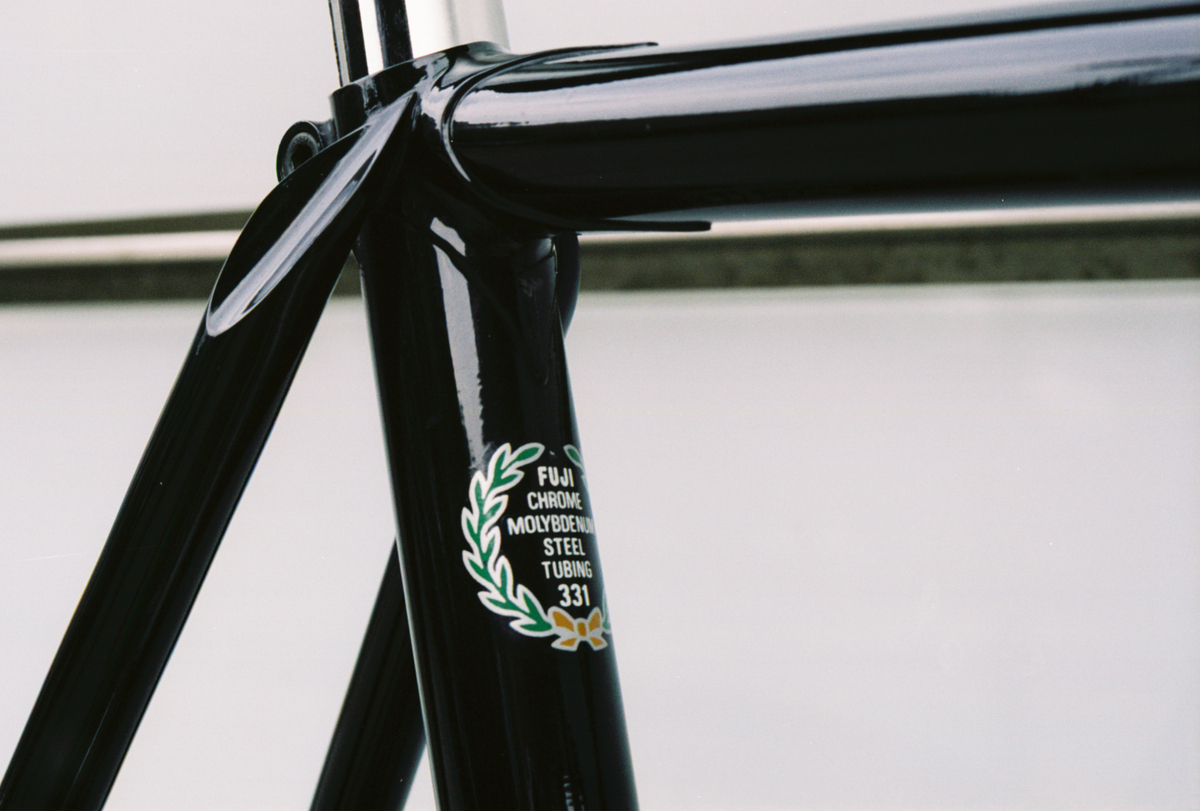 Note:  William is the graphic artist/designer that created the "3-Dot" logo for Fuji back in the seventies.