Brian over at FujiBMX.com is a frequent contributer and has sent me some photographs of his time capsule 1982 Fuji S12-S Ltd.  All original, bar tape and tires as well.  Who knows, maybe the air in the tires as well!

The color black or in this case "Ebony", wasn't a common color in the Fuji line.  The mid '70's brought the first Fuji bicycle in black, the older sibling of the S12,the S10-S. 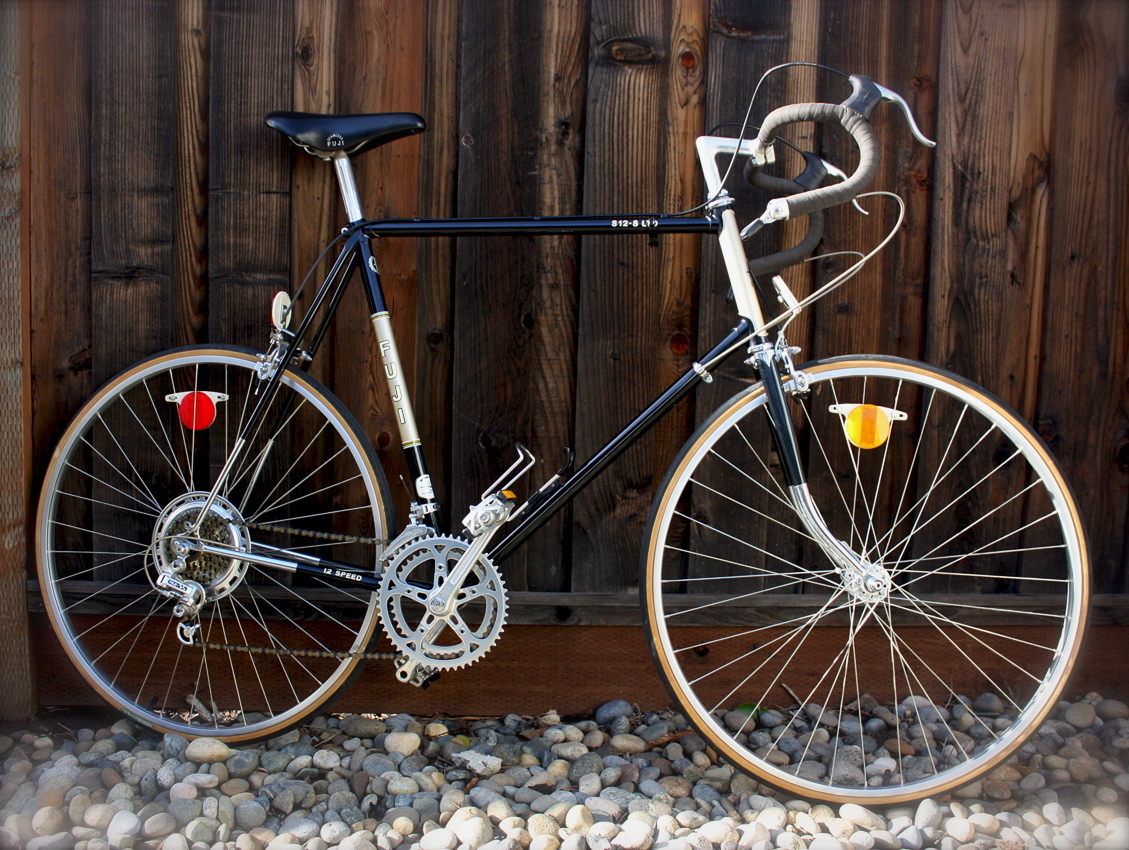 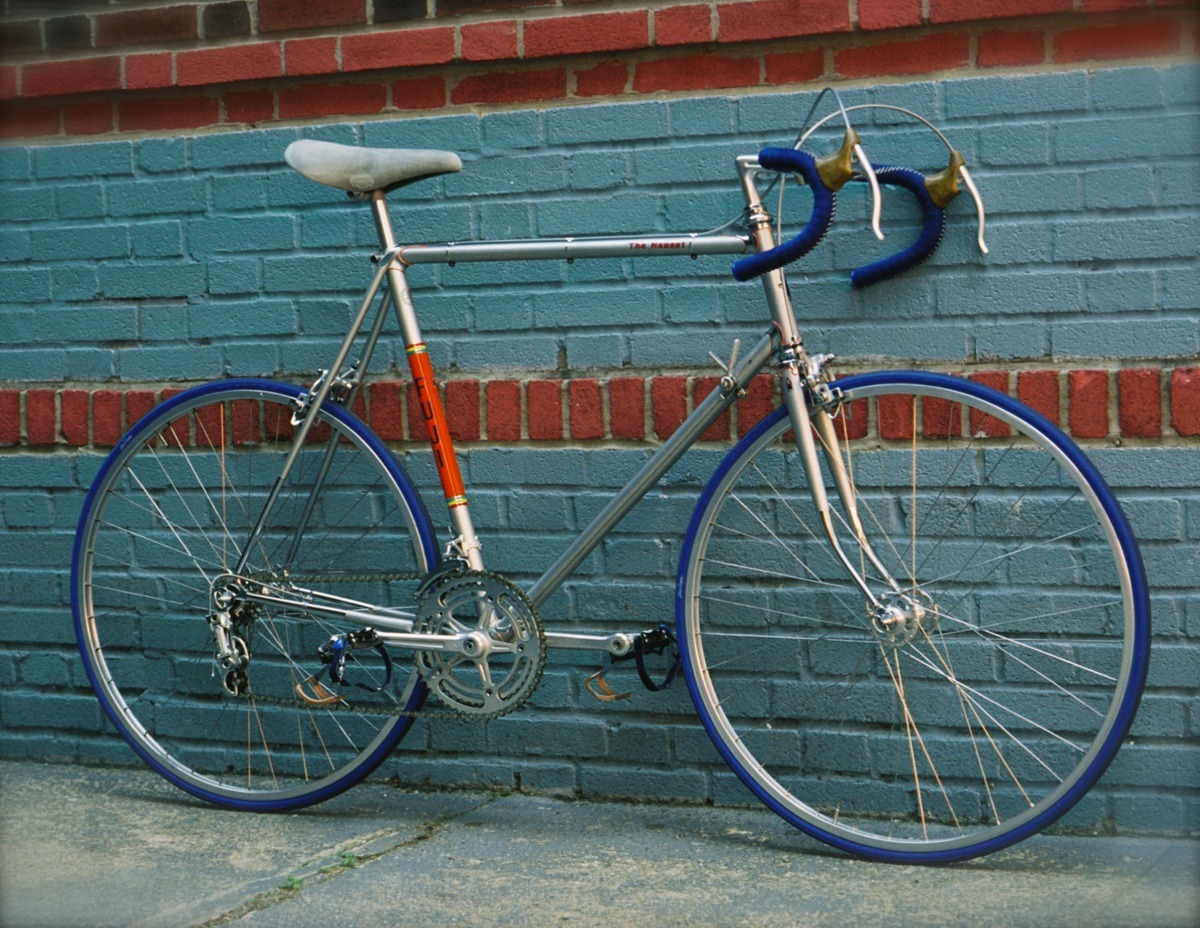 To complete the sneak preview a few weeks back, from William Bevington:

"The early vintage Fuji Newest, from 1972 until 1976, possesses such a stunning livery of silver, orange, and superb quality chrome. I was fortunate to have acquired one of the first "second generation" versions of this icon of early Fuji export exemplars. These came with the Gran Compe brakes, the special alloy freewheels, and the updated Suntour masterpiece, the V-Lux rear derailleur. In fact,mine was the very bicycle used for Fuji's Rolls Royce ad (which ran in multiple lifestyle magazines, but not, I believe, the bicycle press.

http://vintagefuji.posterous.com/fuji-posters
Sadly, I sold that fine machine during the dollar-desperate college years. At the Fuji Cycle Center in New Jersey we sometimes dreamed of the ideal bicycle, as did every mechanic and amateur racer; it was, of course the Newest with Suntour derailleurs, cogs, and the wonderful PDL-M shifter. However, the Fujita seatpost and even the Gran Compes, though nice, could not stand up to Campagnolo's seatpost and sundry other components. Suntour blew-away the Nuovo Record derailleurs, but there was a bit of catching up on the part of the other manufacturers. Eventually. This is a special version of the Fuji Newest that took 30 years to realize; Fuji did not use any Campagnolo until the Professional Super Record of the early 1980's. This is built to accentuate the masterful livery and spirit of the then top-of-the-line offering, I found a NOS grey suede Fujita Professional Seamless saddle on eBay; and the wonderful Fujita blue suede tape was sourced from the ever-selfless Fuji enthusiasts, friends, and aesthetically-minded co-cyclists. I know I should have ditched the derailleurs for the Suntours, but, its hard to break up a gruppo, no? The racket ball blue pushes the livery one step further; another touch is the Weinmann concave alloy rims from the early 70's and the deep blue Toshi straps for the toe-clips — oh, yes, the milled pearl stem, Fuji's special treatment for the Newest; it's fun to dodge the yellow taxi cabs with this one." 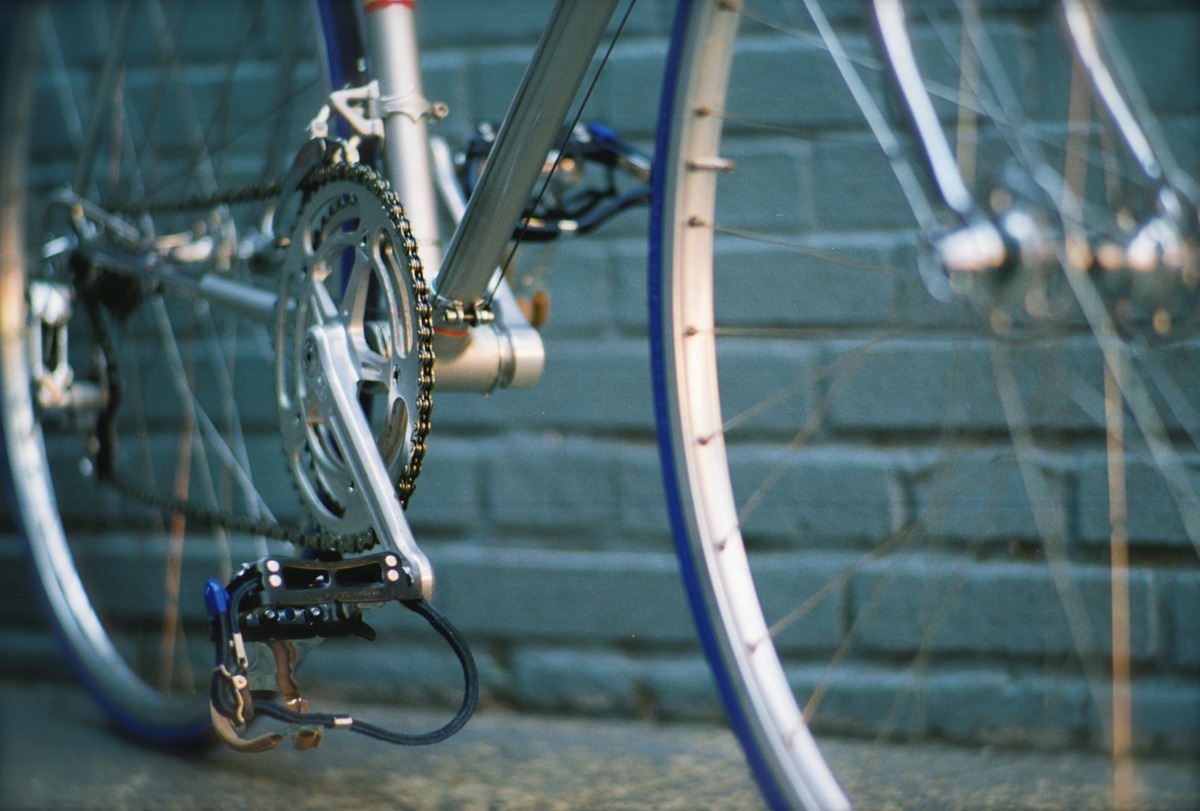 William has carried the flame a bit further on his Newest, he went with "real" film, the aptly named Fuji Pro 160, his trusty Leica mounted with either a 60mm macro or the the standard 90mm. Processed in E-6, than scanned to digital. 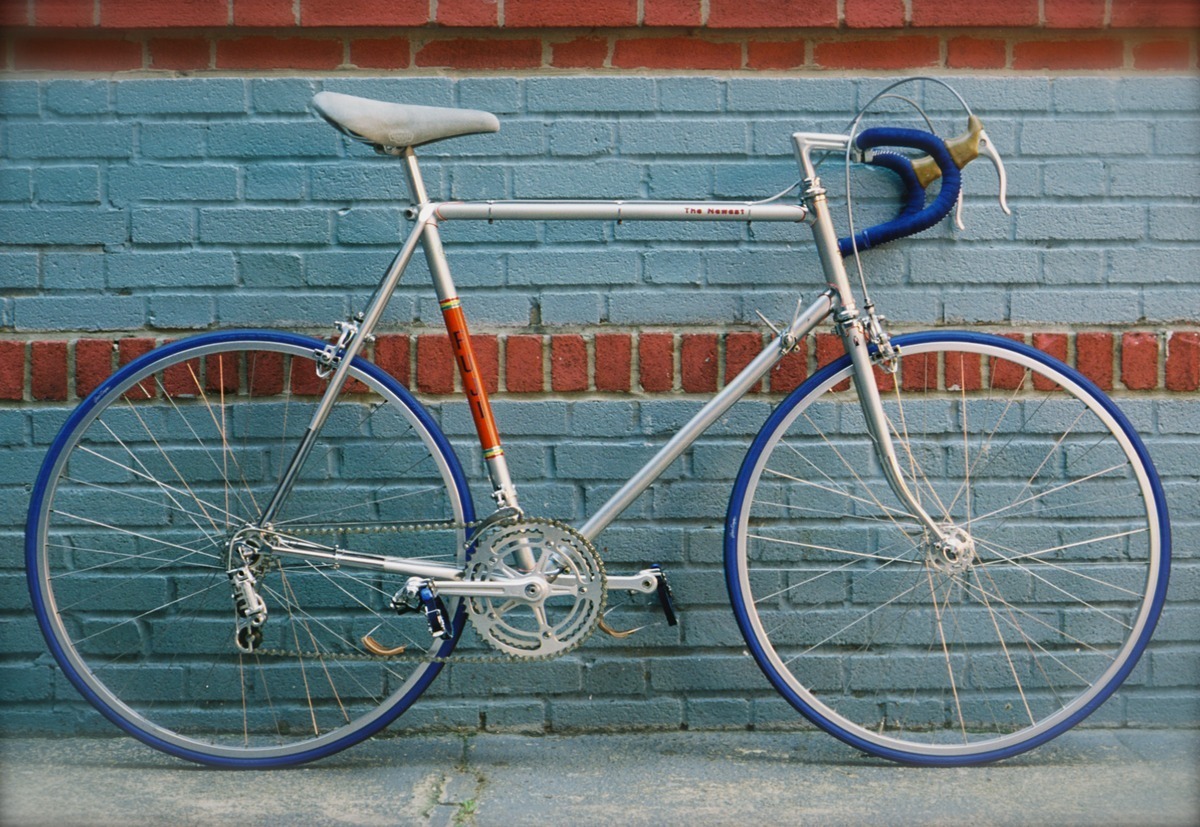 Last October I posted a set of photographs of what I consider a a dream project, three Fuji Professionals that needed rebuilding. 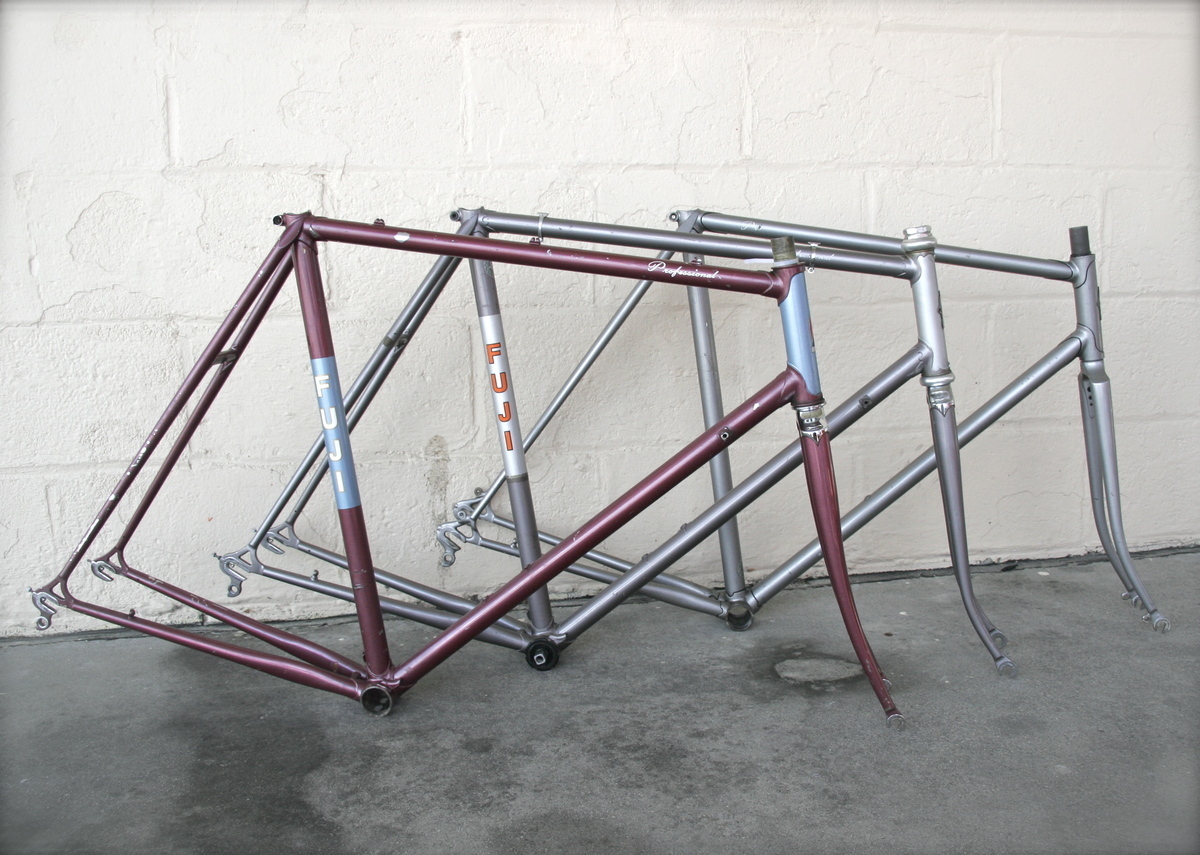 I acquired this Professional off the Seattle Craig's List, thousands of miles west of me. I found the colors interesting, it wasn't the stock two tone ruby red, it was more of a rasperry with light blue seat tube panels and head tube. All the lugwork and the bottom bracket matched an early eighties Professional so there wasn't any doubt it was truly a Pro. Another oddity was the serial number, it wasn't the correct format.  Normally it would have been two letters, followed by 6 digits, for example FD156015. This serial number was 81J5I.  Perhaps this frame had been ordered custom from Fuji?  Maybe someone high up in the Fuji chain? 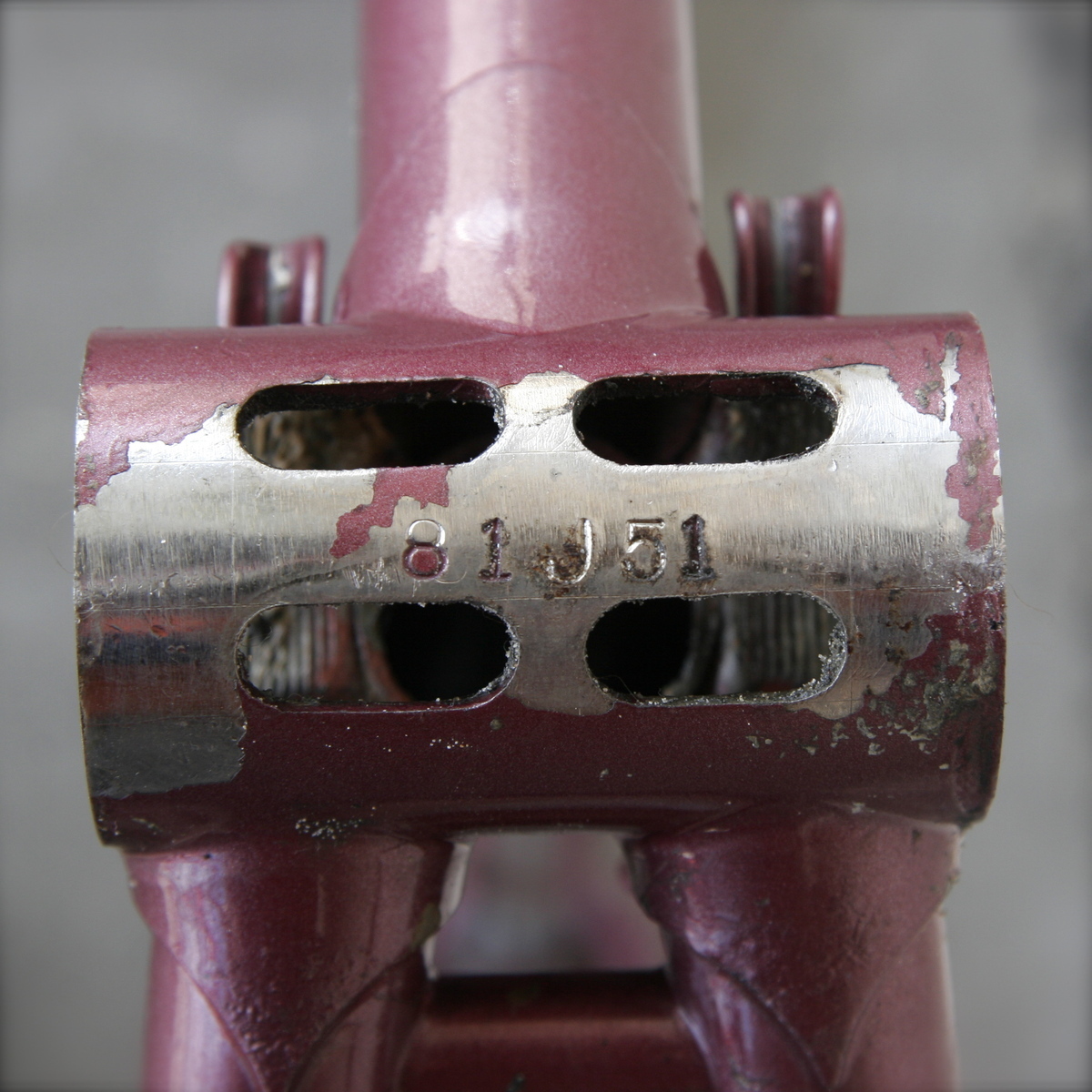 The paint was rough, no rust but it was bare in spots.  Usually I wouldn't make changes on a frame of this caliber but I decided to strip it to bare chrome and then, if I learned more of it's history, repaint it in the raspberry and blue livery.  I left the blue panels, they were in excellant condition, as were the decals. 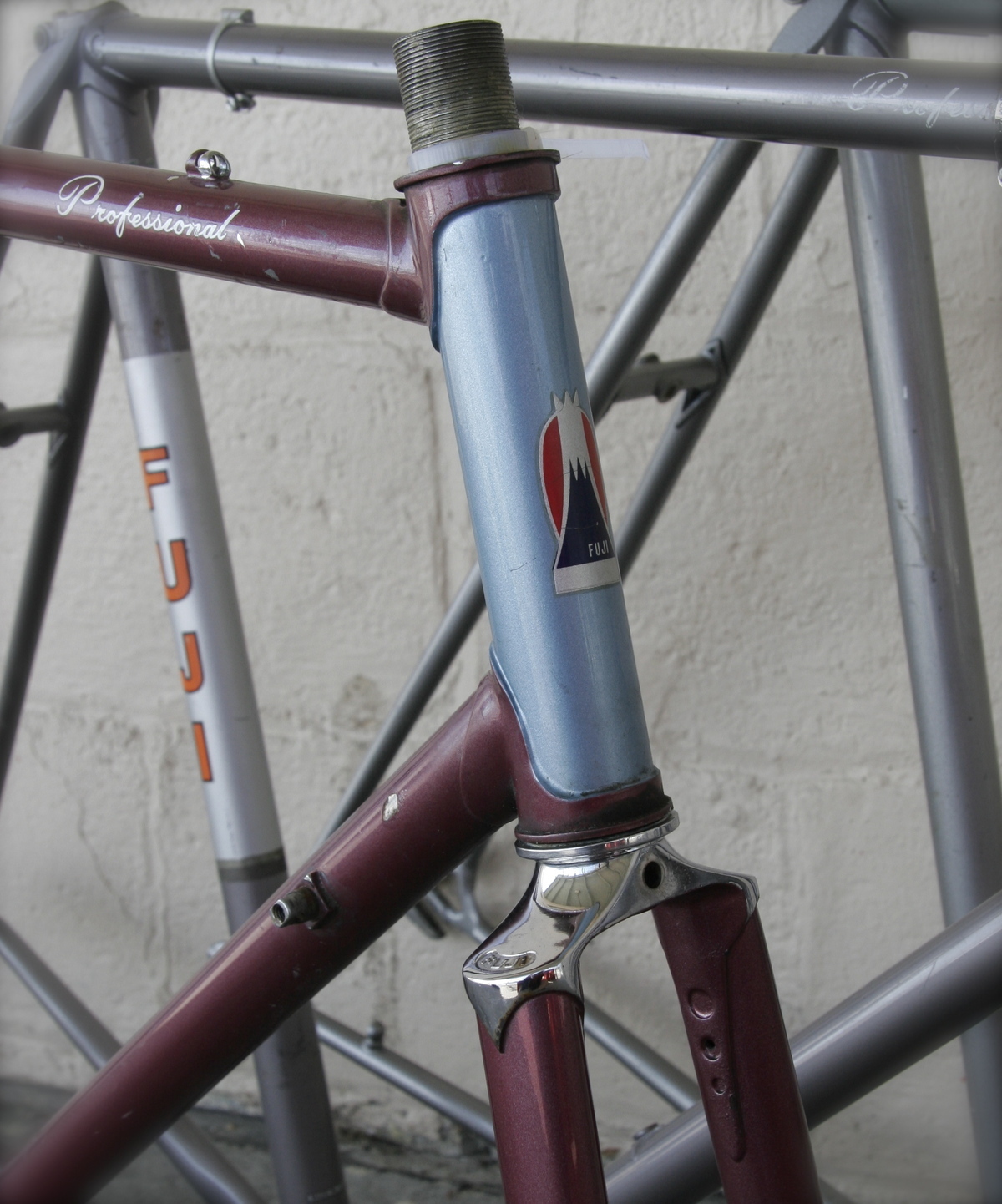 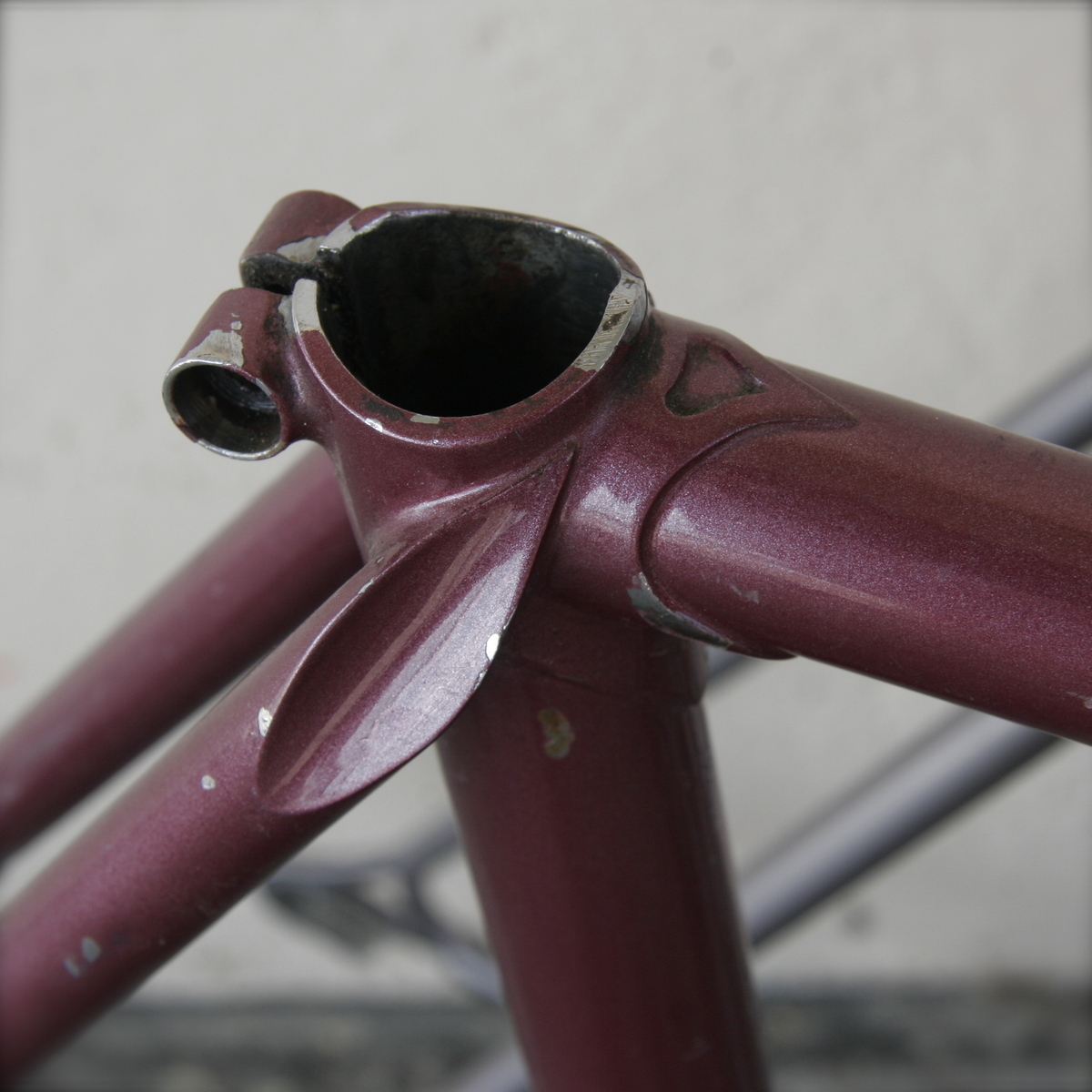 Much to my surprise I was contacted by a gentleman named Michael, who commented on the Oct. 15th. post.  "I think that's my frame".  WOW!  Sure enough, it was, he had worked at Life Cycles in Cambridge, MA in the early '80's and this Professional had hung in the shop. He decided to have it repainted, rode it and eventually sold it.  How it ended up on the west coast I'll never know.  Michael actually lives less than thirty miles from me and has become a good friend and valuable resource for all things Fuji and Life Cycles.  He even supplied me with some images that were taken during the re-painting process, absolutely fascinating! 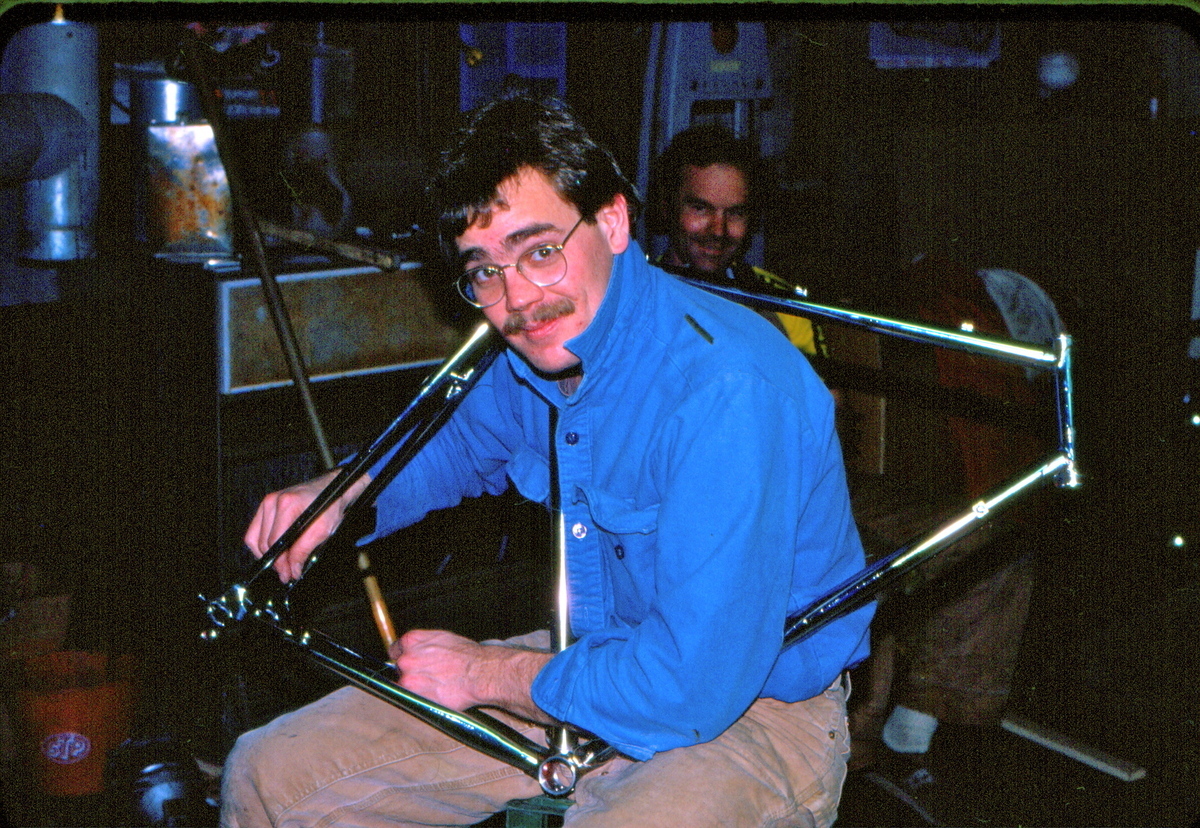 Here's the frame today, all Suntour Superbe, Nitto Crystem, Ukai tubular rims and a blue suede Fujita saddle that appeared one day as a buy-it-now on eBay.  I've taken some artistic license with the pump and other detailing.  Gorgeous polished Superbe crankset, pedals, SR Royal seatpost and Crystem thanks to my friend Keith, the polishing master. 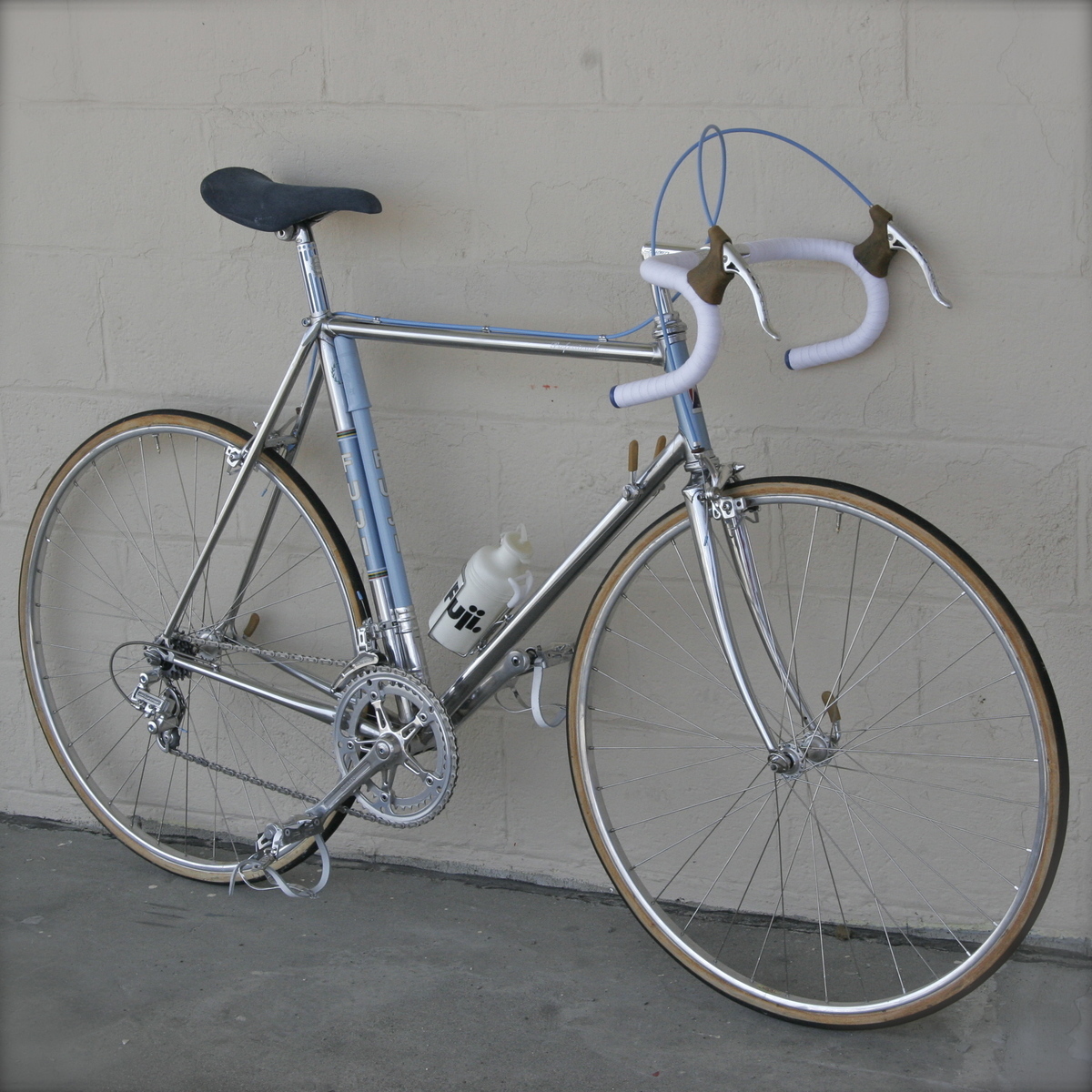 This little gem of mine resides in Florida, a great cruiser for just exploring or trips to the store.  I've made some modifications to the bars and saddle and added a big old bell. 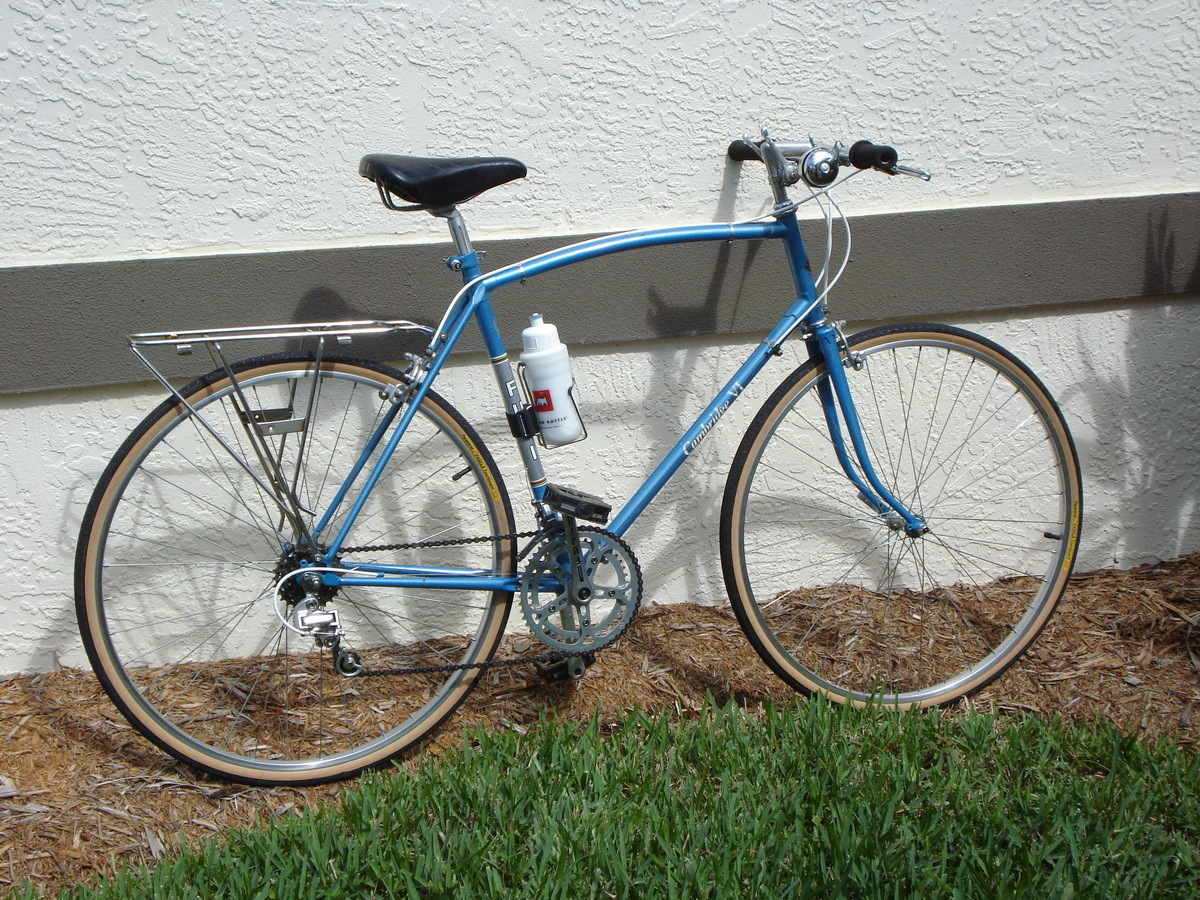 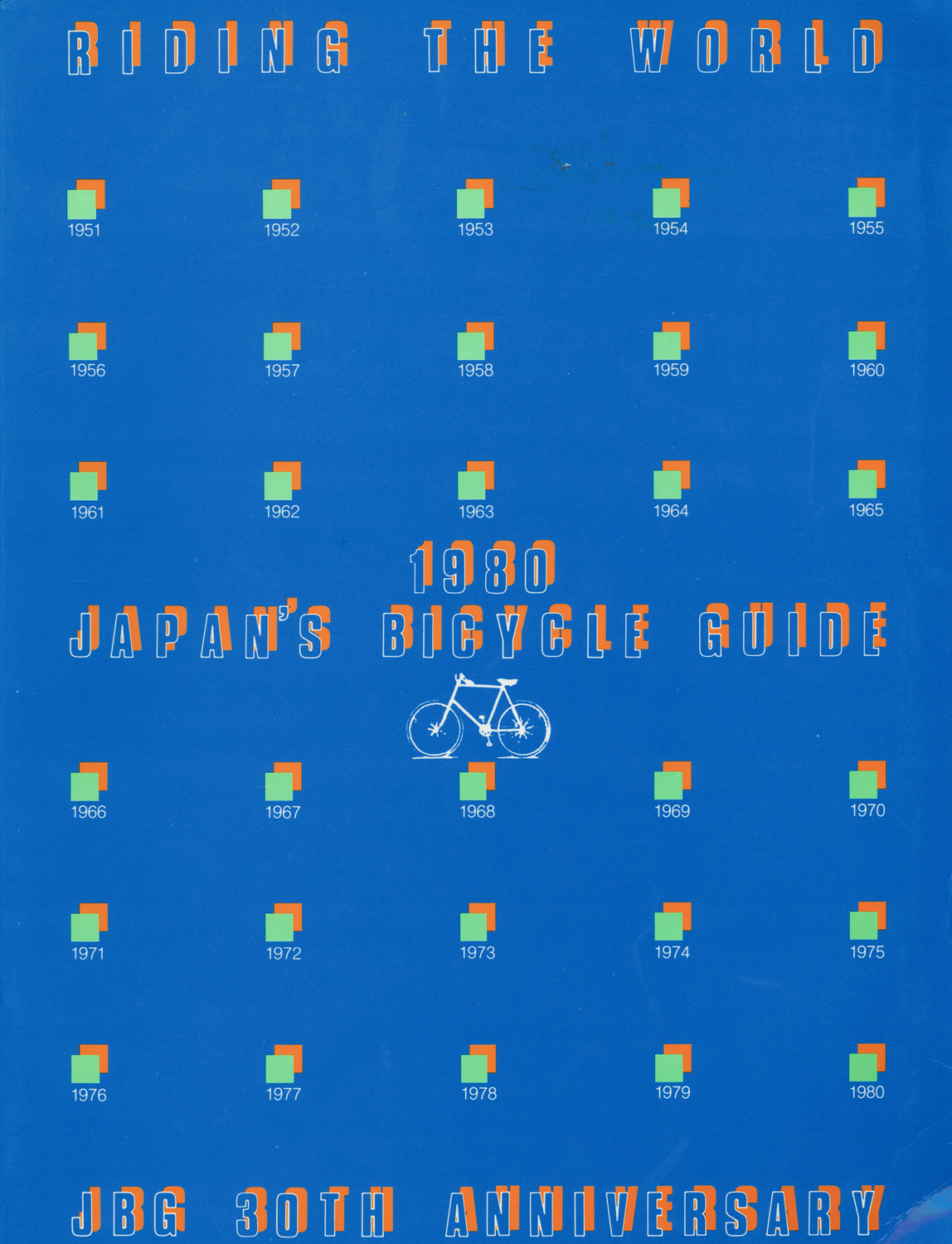