Another rare visitor from Japan, again from friend Matt, his stunning red and white 1988 Design Series built up with a mix of Superbe and Superbe Pro. Thanks Matt! 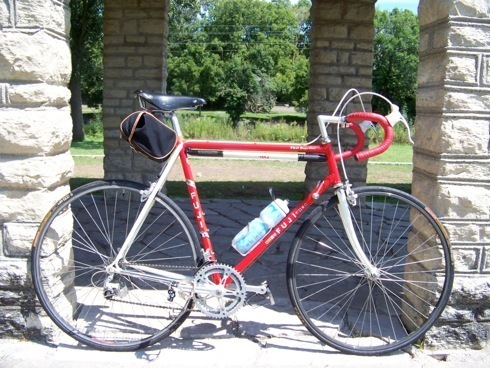 A very, very rare gem in the Fuji line ....  At one point I thought I'd see a unicorn first but my friend Matt has been kind enough to share photos and a wonderful story behind his:

"Up for presentation is a 1984 Fuji Professional Super Record. From the moment that I learned of its existence, this model became the holy grail for my collection.  Little did I know at the time that I would acquire one so rapidly". 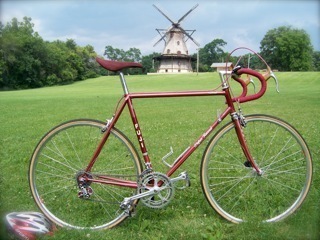 "My first adventure into Italian components, as a loyal Fuji/Suntour fan, I was eager to try out my first bike built up with Campagnolo.  Waiting for it to arrive reminded me of waiting for Christmas as a child.  When it finally got here, I noticed the Bob Beal decal on the top tube pretty quickly and thought that was odd. Since it was a higher end bike, I originally thought that it was just a means for the original owner to deter theft and did not think too much of it". 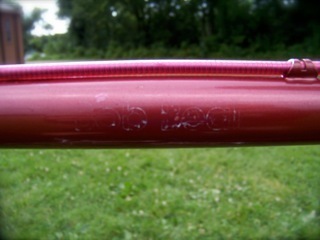 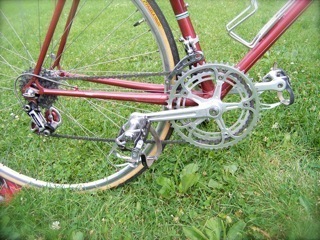 "Being a particularly rare frame, I focused my attention to the condition, which is pretty good for a twenty-six year old bike.  Of course, there were numerous scratches and scrapes on the old girl, but it certainly wasn’t necessitating a repaint.  I was concerned with a few spots and a bit of rust, so I did go ahead and touch up noticeable spots with a bit of fingernail polish. I know that this is a bit of a crime among some vintage bike enthusiasts, but I did so in the thought of keeping and preserving the bike, not out of vanity. When the day comes that I must finally sell her, most likely on my deathbed, I can rest assured knowing that she will remain in good structural condition for the next happy owner". 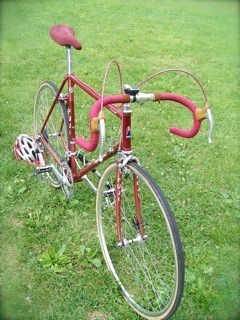 "Curiously, Fuji veered from its usual component group of Suntour/Sugino/Dia-Compe and created this very well built bike by sourcing components from Campagnolo. As functional and attractive as Suntour Superbe is, apparently Fuji wanted to reach a larger pool of racers who, at the time, considered Campagnolo to be the highest quality component maker. True to its name, the bike was originally built up with a combination of Super Record and Record components. A Crystem stem and Nitto Mod 55 bars were used to finish the bike off. 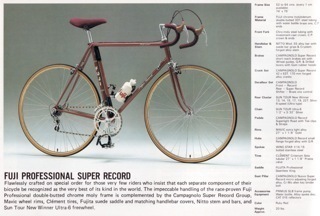 "Unfortunately, many components were swapped out by the time that I acquired the bike.  The Crystem stem and Nitto bars were long gone and replaced with a Cinelli bar/stem combo. The original wheels were missing as well, but a set of Campy Record hubs with Araya clincher rims are an adequate replacement. Oddly, the seatpost was actually a 26.2, with a shim to raise the diameter to 26.6.  I’ve since found a good deal on a Campy Nuovo Record in the correct size". 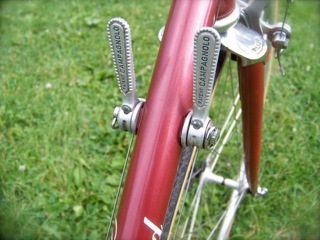 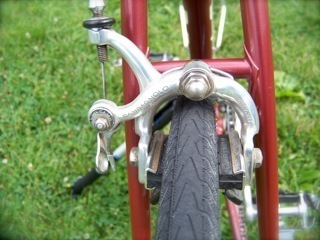 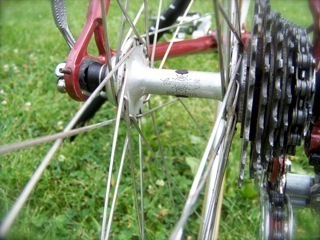 "As for the Bob Beal decal mentioned before, after securing the bike in the garage, I went ahead and did a little internet searching to see if any information was available.  After a quick google search, I noticed the Bob Beal Masters Weekend out in Rhode Island.  Obviously, this piqued my interest. I went on to do more searching, eventually finding a book titled “Never Give Up:  Personal Stories of Staying Young Through Sports”, which has a section dedicated to Bob.  This gave me the information that he was from the Boston area, so I contacted some shops and cycling clubs in the area.  That is when a flood of information started coming back to me from many of his old friends and associates". 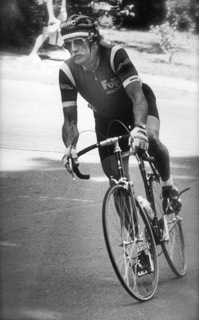 "Apparently, Bob owned his own business, the Charrette Corporation.  Working himself to death,  smoking heavily, and eating a poor diet, he finally quit at the age of 55.  With free time to spare, he decided that he wanted to start cycling and joined the Massachusetts Bay Road Club, which he credited as his salvation.  Finally, Bob started to take care of his health, by giving up cigarettes and eating healthier.  After a short time, his competitive nature compelled him to start road racing.  After his first race, which he admitted that he could not finish, he bought a new and very expensive bike, with the hope that it would make him more competitive.  What he hadn’t realized, was that his bike was not the problem, it was his physical condition" 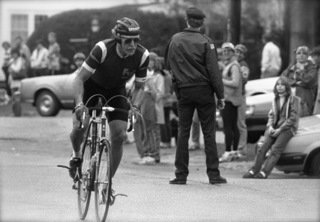 "A stubborn or disciplined man, Bob continued to compete for almost twenty years, becoming a major competitor in the Masters division of racing and moving on to cyclocross, in order to stay fit over the colder months.  He won races and suffered crashes, but I found that the most inspirational aspect of his racing came from his determination to continue riding, not after one, but two heart attacks and a fractured skull.   In one particular crash, he broke thirty-eight bones, including his neck, but that couldn’t stop him from riding again". 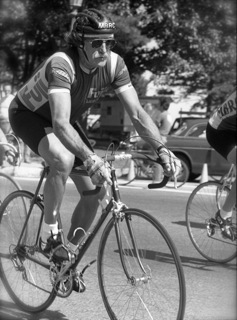 "From talking to his old friends, Bob grew to become a guide for newer cyclists, quick to offer advice and to coach their techniques.  This led him to foster such well known New England cyclists as Frank/Mark McCormack and Paul Curley.  Eventually, he was even asked to join the U.S Cycling Federation to become an Olympic coach.  There, he ran the Junior Olympic camp and was rewarded with a chance to help train a very young Lance Armstrong as a prospective Olympic athelete, with whom Bob became very proud.

Eventually, even Bob could no longer race or maintain his duties as a USCF coach and retired.  In his 70’s, he was still able to ride three-hundred miles a week and schedule workouts for professionals in training.  He also earned the recognition that he deserved for his work representing New England cycling.  The Bob Beal Masters Weekend was created, with Bob rumored to have created the medals.  (If anybody could confirm this, I would be appreciative.)  He is now considered a legend in that area". 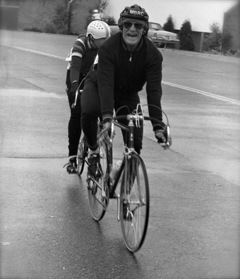 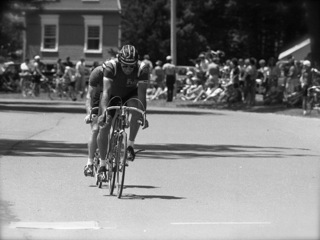 "Sadly, Bob passed away on August 29, 2009 at the age of 82.  While much of the information that I provided came from the book mentioned earlier, there was no shortage of friends willing to assist with what they could.  Everybody admired the man, a few who had lost contact were saddened to hear of his passing,  and many recommended that I should drink a Samuel Smith Nut Brown Ale, in honor of Bob and his time with the Massachusetts Bay Road Club.

In hopes of preserving his history, I was able to find some pictures of Bob, some on this bike, so that I could frame one and hang it above the bike in the garage.  I’d like to thank Bill Wharting, the photographer for the Wheel Paper, which was the newsletter for the MBRC.  Apparently, he was charged with writing the eulogy for Bob’s funeral.  It was quite lovely.

For now, I will continue to think fondly of Bob and his inspirational history.   It certainly adds great character to this old girl". 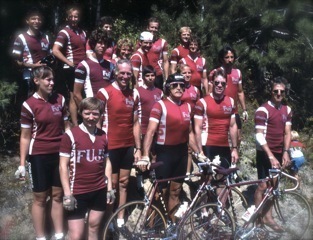 "For this information, I would like to thank Bill Sykes, Edward Bayer, Bill Wharting, Jim Quinn, Mark McCormack, Tom Vinson, and all of the rest who were so helpful in my research".
Matt 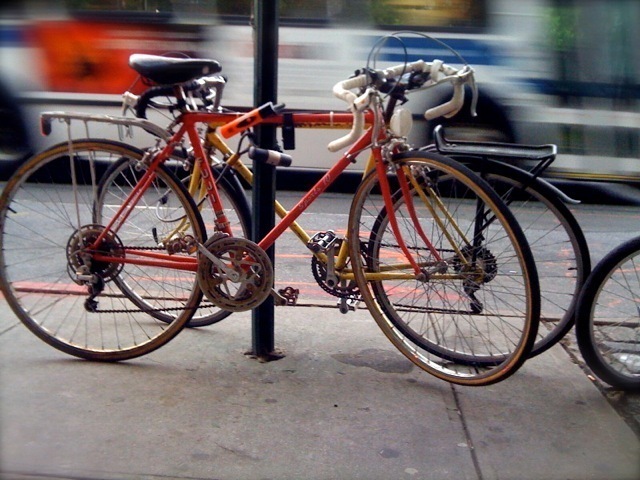 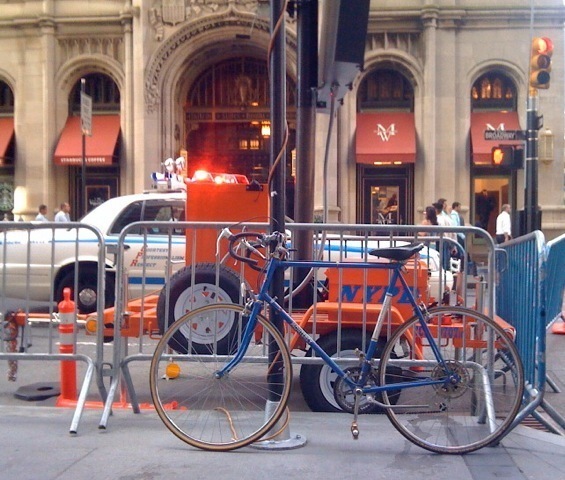 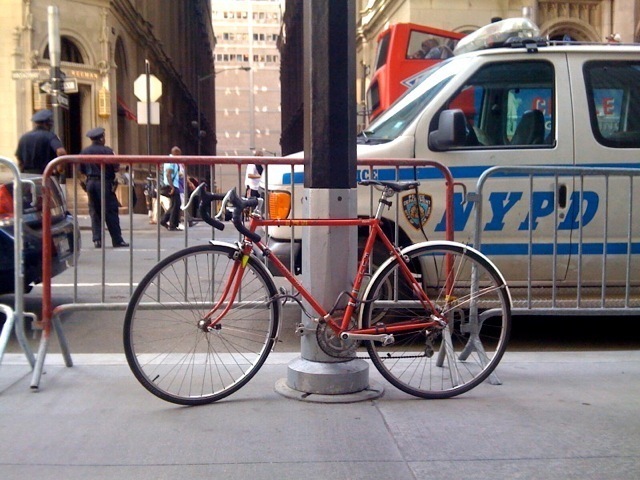 A Sports 10, also under the watchful eye of NYC's finest. 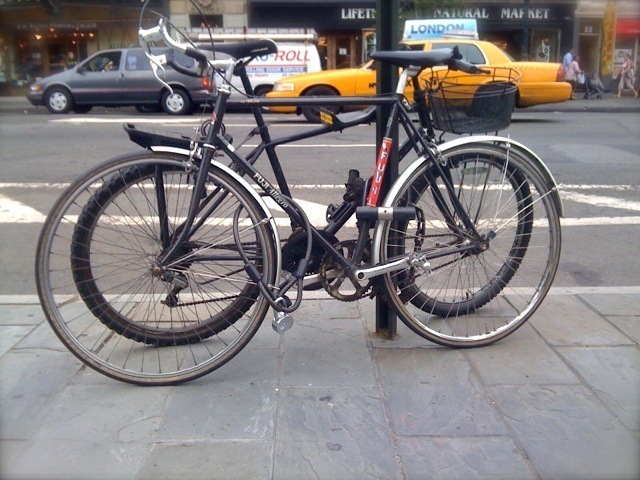 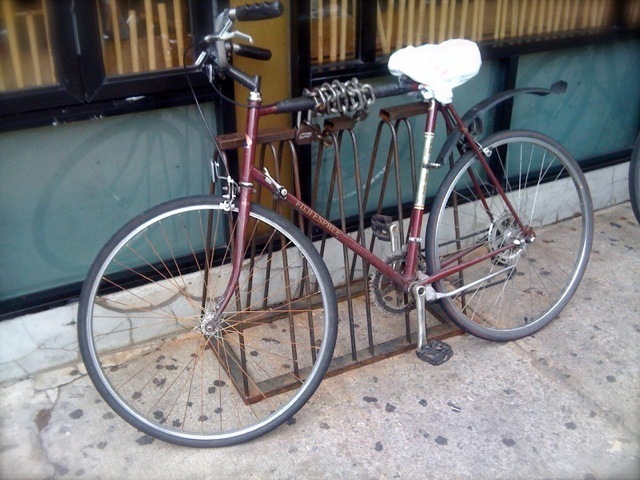 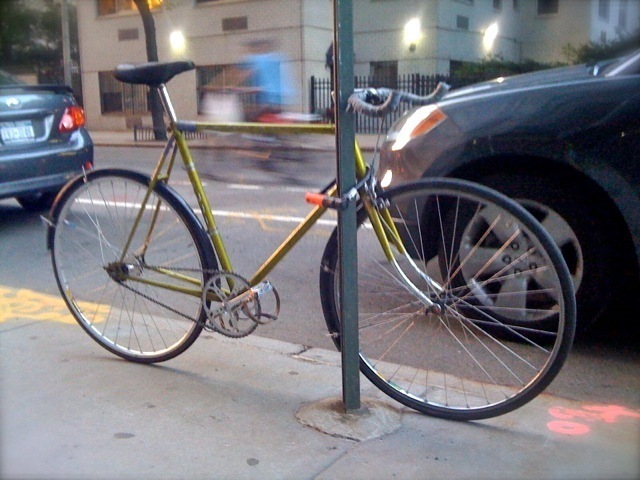 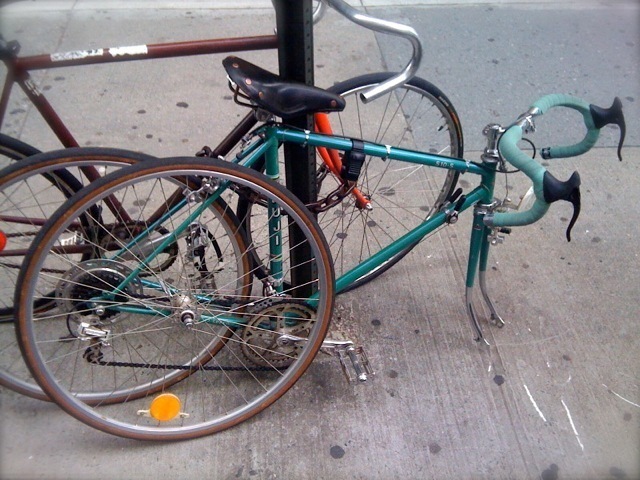 An S10-S with a Fujita Pro saddle! 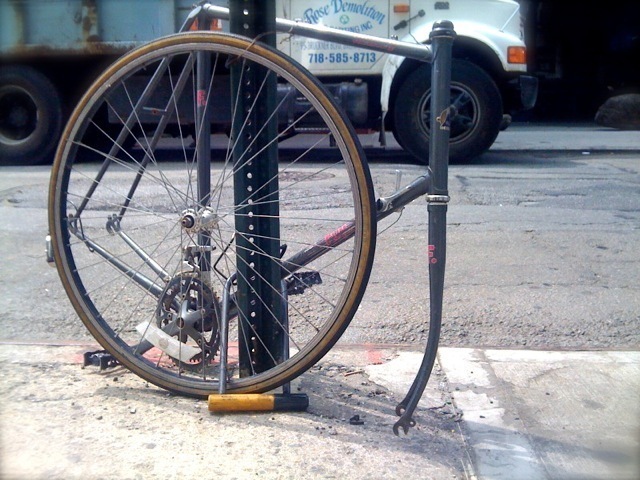 A skyscraper of a Fuji, a Del Rey perhaps. 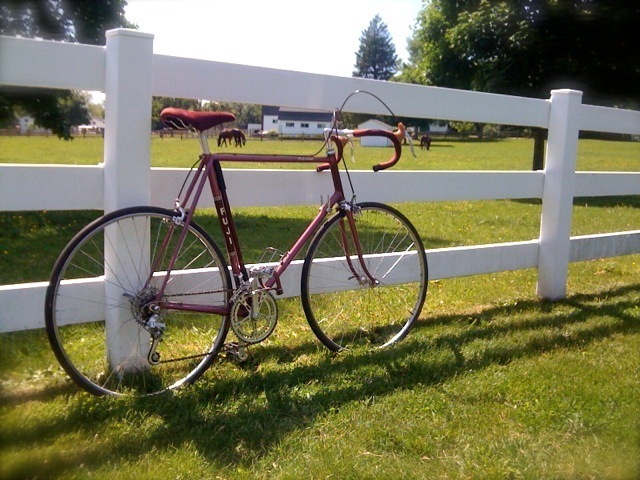 My friend Kurt is the original owner of the 1982 Newest that I posted photos of on April 20th. He sent along some photos of himself and the Newest back in the day. Thanks Kurt! 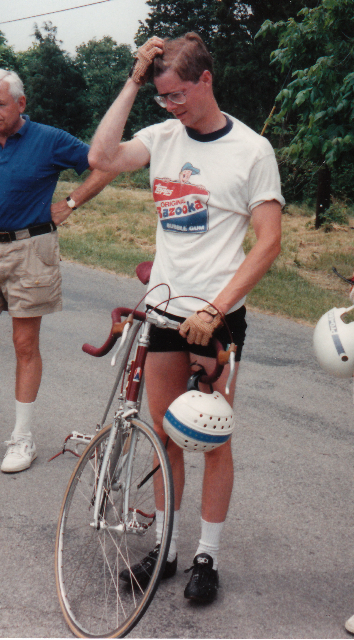 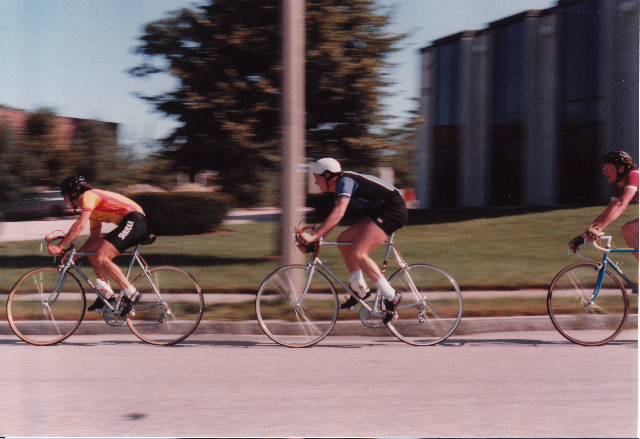