My friend Richard Nadler has done a fantastic restoration/preservation job on his 1974 Fuji "Newest".  He's the originally owner and has written a really helpful story on his process. Lot's of photos at the very bottom. Thanks for sharing Richard! 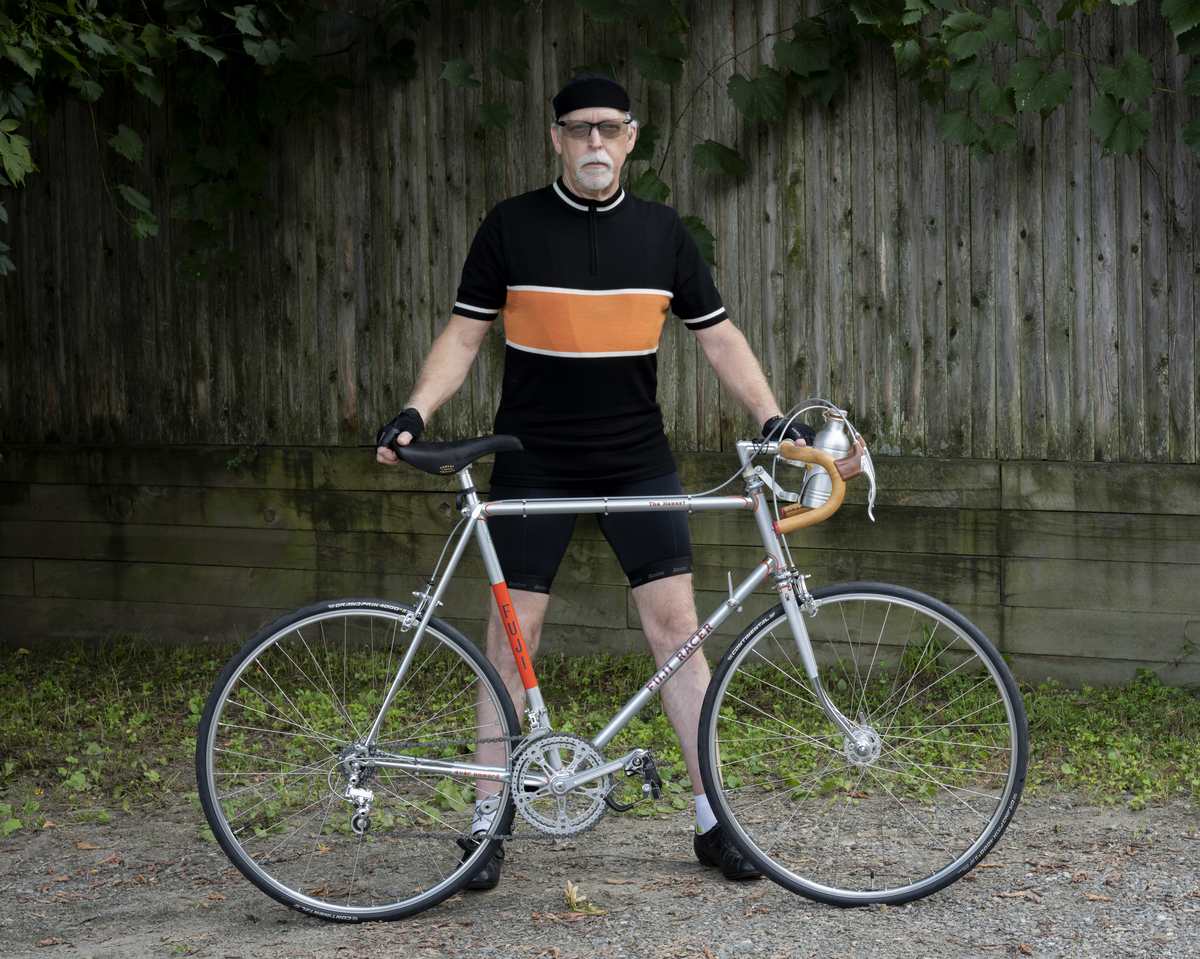 I purchased this 1974 Fuji Newest new from the Fuji Cycle Center of New Jersey which was located in Rochelle Park N.J. in December of 1977 for $640.00. It was delivered with first generation Suntour Superbe components and clincher rims instead of tubular rims. Interestingly, serial number on the frame indicates that the frame was manufactured in 1974. The Suntour Superbe components were most likely manufactured in 1977. I know of one other 1974 Newest that was built to these specifications.

I rode my Newest extensively up into the mid '90s when I took it apart. I stripped the paint off the frame to repaint it. Like many projects begun with good intensions, parts remained in boxes while the wheels and frame hung suspended in a garage for the next twenty some odd years. In 2015, I decided that the time had come to complete what I had started many years earlier. It was time to restore the bike back to a 'like new state' 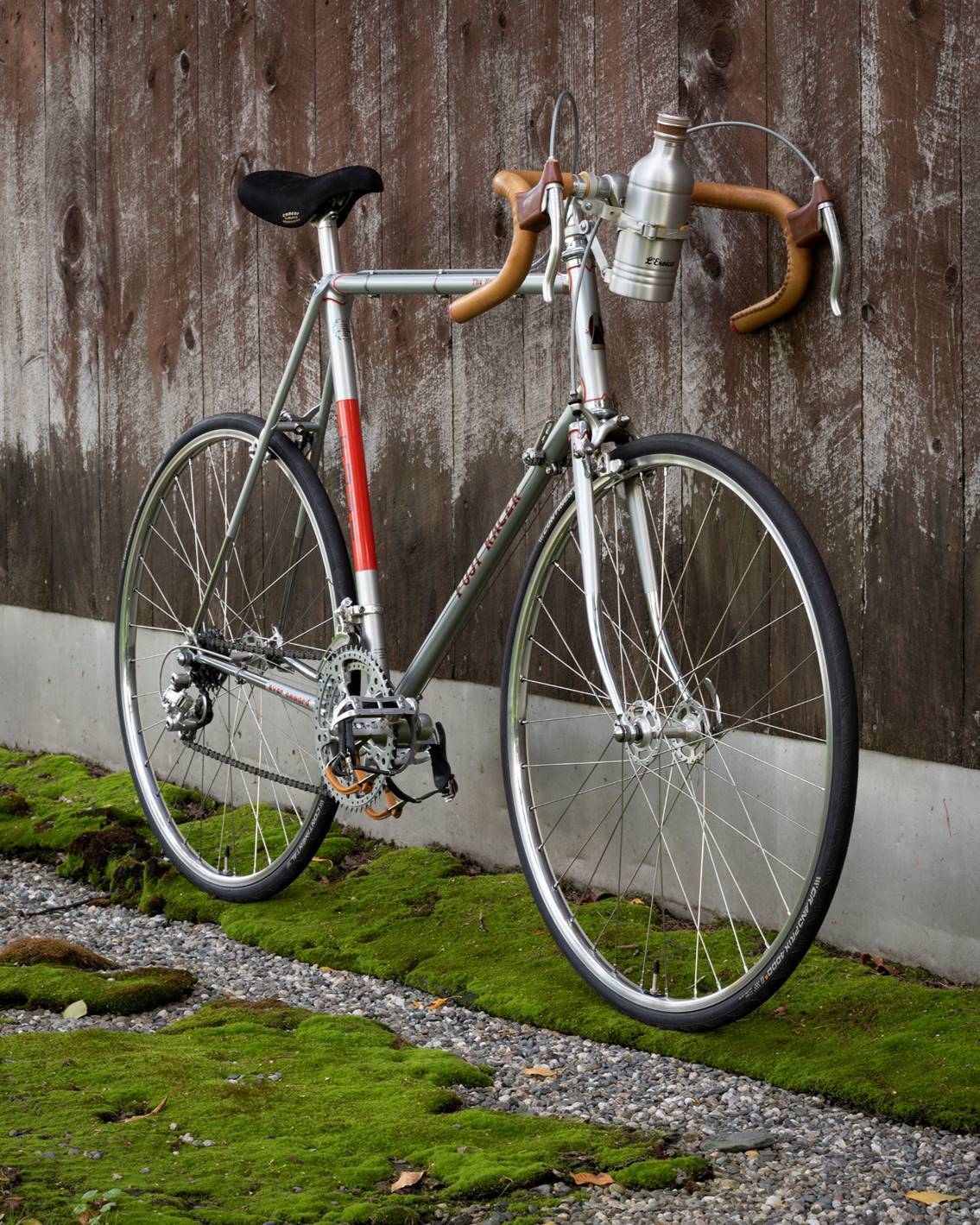 From the onset of the restoration, I set the following guidelines for the project.

Once I established my guidelines, a general assessment was made to determine the scope of the work and materials needed to meet my goals.

All cables and cable housings

In the spring of 2015 I sent the frame to a custom paint shop for powder coating. The search for replacement parts was on. Meanwhile, parts I deemed still good were meticulously cleaned in preparation for the build. The parts search went on well into 2016 before I acquired what I needed to start rebuilding the bike. In the July of 2016, I took the wheels to a local bike shop to replace tattered spokes.  By late August 2016, I was able to reassemble the bike. However according to my own rules of engagement, there were problems that still needed to be addressed.

When wheels returned from the bike shop, the rear wheel was not true to my satisfaction. The shop said it was good enough considering the mileage on the rim. Additionally, I could not find a tire that I felt could match the true character of the bike. Over the years, offerings for 27" clinchers has dwindled . The best I could find was a pair of Continental Ultra Sports. Although they are very comfortable riding tires, they are oversized and heavy with lackluster performance. I was not happy on two counts.

On the very first test ride, it became evident that freewheel and chain both needed to be replaced. The freewheel had worn bearings bad enough to add noise and resistance under load. Also, the center cog on the freewheel had a hairline crack that opened up wide after just a few miles. I somehow missed this during my visual parts inspection. I could not ride the bike.

A pair of NOS pedals identical to the original pedals were available on eBay from the very start of the project. But not for a price that I was willing to pay. So, the initial build was completed using a newer version of the Suntour Superbe pedals from the '80s that cost hundreds of dollars less. These newer pedals have black cages which do not fit the character of a 1974 bike. They looked out of place on the bike.

I hadn't purchased the decals during the initial build because at that time the only decals available were stickers not the waterslide type popular when the bike was manufactured. Although sticker styled decals became common place on bikes years later, they would never be found a bike built in 1974. They are thicker and have a different look. I could not get myself to put them on this bike. 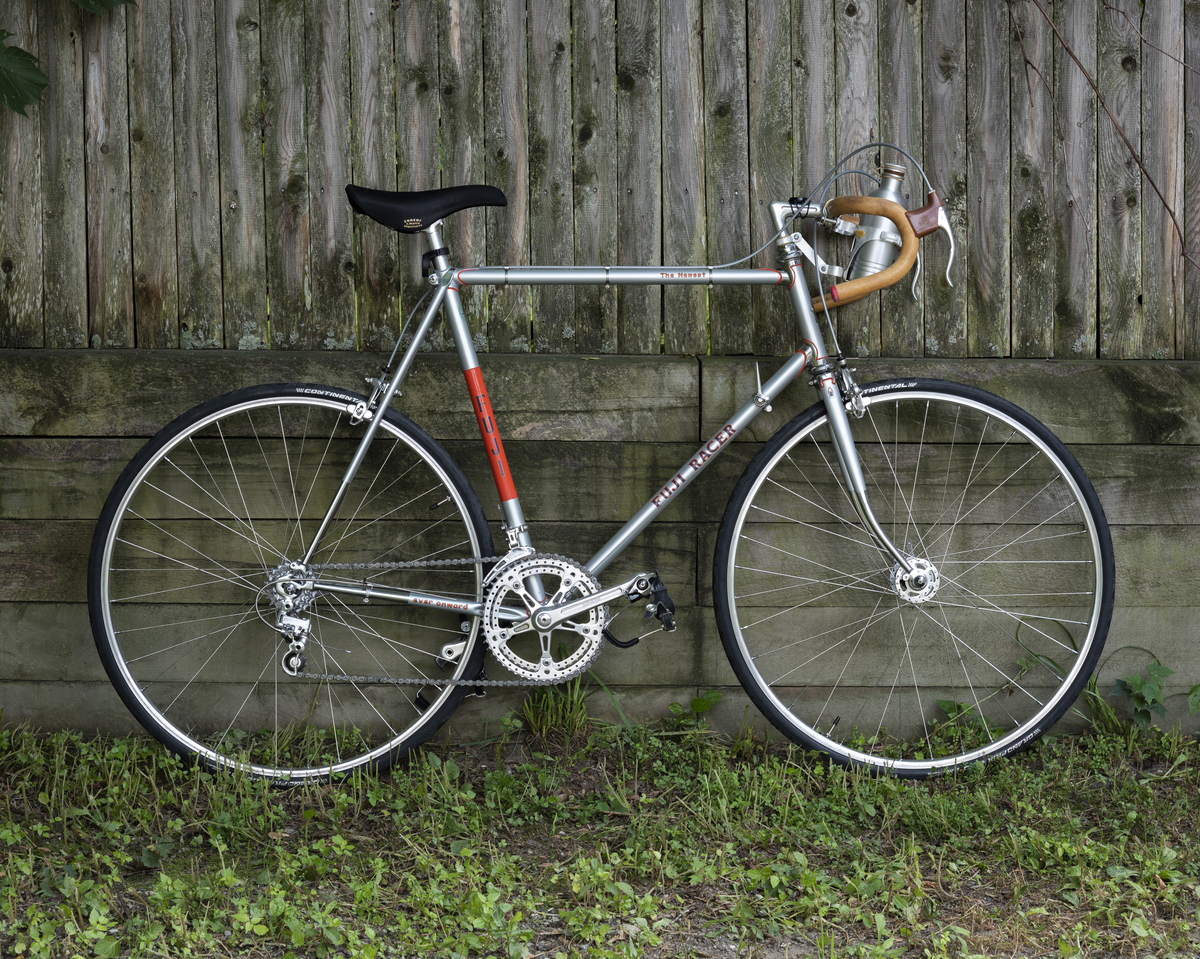 Between August of 2016 and July of 2017, I was able to address all of the problems with the following remedies to bring the project to an end.

Because of how poorly the rear wheel was trued and the current total lack of high performance 27" tires today, I decided that I would rebuild the wheels myself.  Going to 700X23mm rims would support a wider range of tires. I quickly learned that light weight performance 36 hole rims are no longer common stock with retailers. My solution was to import a pair of H Plus Son TB14 700X23mm wide rims direct from the H Plus Son factory in China. I also bought all tools required to build and tune wheels. I cut and threaded the same new double butted spokes that the bike shop had used for the initial rebuild of the 27" wheels. I can proudly say that my first wheel building experience went off without a hitch. Yes, I am now a wheel builder. I chose to install my favorite tires, Continental Grand Prix 4000s.

I already had located a NOS freewheel and chain during my initial parts search. It was easy enough to obtain and install both of these items.

More than a year and a half later, the same pedals that I had first seen on eBay still had not been sold. When I started the project, they were $600 (ouch). They would crop up and drop off eBay periodically. Each time they reappeared, the price got lower. While I was resolving my other restoration issues, they cropped up again. This time the price $250.  On the first day of the post, there over 100 eBay watchers. With that enormous increase of interested people, I knew they would soon sell. The timing was right and the price was now within reason. I bought them without hesitation.

In the same timeframe, Velocal introduced waterslide decals to their inventory. I bought a complete set.

The new wheels, tires, freewheel, chain, pedals and decals were exactly what was needed to meet my established rules of engagement for the project. In the end, very few alternate parts were used.

Obtaining an original seat seemed to be impossible. A 'Sella San Marco Concor Supercorsa' was chosen not only because of how closely it resembled the original seat. It is a vintage seat.

I could not find Suntour Superbe hoods in reasonable condition. In the past, I had replaced the gum rubber Suntour hoods on this bike twice in the first ten years. Both sets dried out and cracked . Rustine hoods are still manufactured and reasonably priced. Although they have that old school gum rubber look and feel about them, they fair better in ultra violet light.

Although H Plus Son TB14 rims are not technically vintage, they are a low profile vintage design. They are strong lightweight channeled alloy rims that accept current high performance tires. Let's just say that I like good rubber on the ground.

The leather handlebar wrap I installed is elk hide. Although it is durable and soft, it also has expanded and contracted in a very unattractive way. I have since acquired new leather wrap from a dealer in England that is identical to the wrap that came on the bike when it was new. At some point, the new wrap will be installed. When that happens, there will be one less item on this non-OEM list.

By taking my time and having the willingness to re-do portions of the restoration that did not meet my minimum guidelines, the bike now has the look and feel it had when it first left the Fuji Cycle Center of New Jersey so many years ago. In fact the newer rims laced with double butted stainless steel spokes in combination with the GP 4000 tires have made the feeling this bike has for the road better than ever. Once again, my 1974 Fuji Newest is truly a joy to ride.

I need to thank Scott Ryder, William Bevington and any other member of the Classic Fuji Collaborative that I may have consulted with during the term of this restoration. I have high regard for all their expertise on vintage Japanese steel bikes. 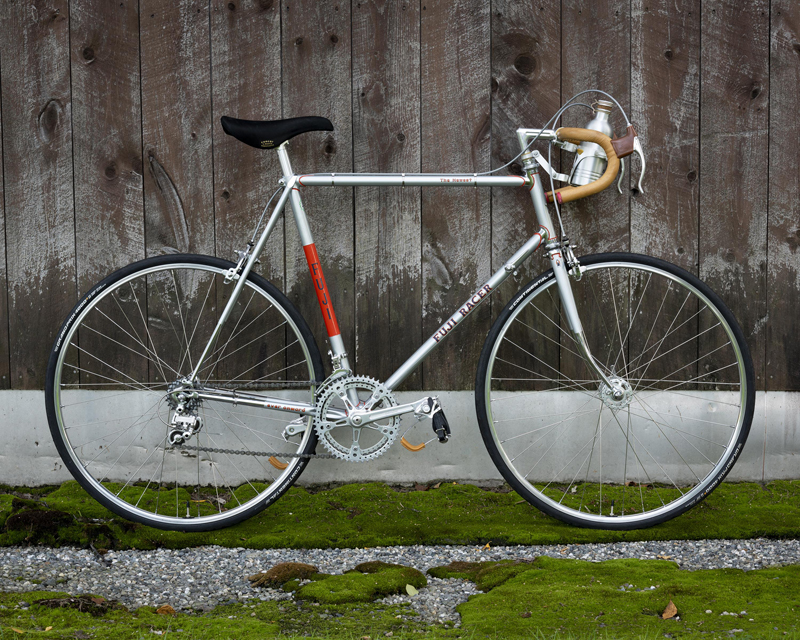